Istanbul on the Bosphorus isn't just a gem of a city, it's the proverbial crown jewels 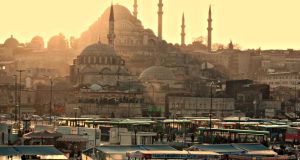 The golden hour as the sun descends over Istanbul. Photograph: Getty Images

In 2010, Istanbul was European Capital of Culture. After even a brief visit, you’d be forgiven for thinking that was about 2,000 years overdue. Indeed that perhaps it was somewhat short-changed on the continental front as it could easily claim the designation for Asia too. Because this is more than a gem, it’s the proverbial crown jewels, encrusted with historic architectural and cultural riches beyond the imagination of even the most ambitious of city builders. And goodness knows, Istanbul has had more than a few of those across 25 centuries.

It’s all about water. The Bosphorus Strait to be more precise, and its 32km trade-lubricating connection between the Mediterranean and the Black Sea, between West and East. Istanbul is the fulcrum about which Eurasian business has pivoted since Byzantine times. It’s a thriving waterway still, along with the Golden Horn, an estuary which cleaves through the city to meet the Bosphorus at the Sea of Marmara. This maritime geography is thrillingly revealed in the Raika Bar’s wrap-round vista from the 20th floor of the luxurious Marmara Taksim. There’s the promise of a fabulous way to explore the city afresh.

The bustling port at Eminönü near Galata Bridge has several piers with ferries going in all directions. However, I fancy a shorter, less-cruised alternative and stroll down from my hotel on Taksim Square to Kabatas. From here, you’ll find rapid catamarans which speed up and down the Strait, and out to Prince’s Islands. More traditional ferries make leisurely crossings to Istanbul’s Asian side, with payloads of commuters, shoppers and blow-ins. Small open cafes line the waterfront and where better to sip a sweet çay (tea) from a tulip glass as you plan a trip. In front, a perpetual shipping show traces back and forth, as this remains one of the world’s busiest commercial waterways.

I decide on a hop-on, hop-off Golden Horn Tour, but with an hour to kill before departure, start my water adventure at nearby Dolmabahçe Palace. Less well known than Topkapi, it is no less beautiful. With a series of spectacular gates from its gardens opening directly on to the Bosphorus, sultans could arrive by barge just a few metres from their Palace’s steps.

Built in 1856, it’s splendidly ornate with almost 300 rooms stretching along the waterside. Dolmabahçe is full of surprises: it looks as if it’s built of stone, but is really plastered wood. There’s an actual Baccarat crystal staircase that we pad up in surgical slippers and each enormous reception room is more dramatic than the last.

Cruising up the Bosphorus later, the idea of arriving home by barge doesn’t quite seem so glamorous as it’s no glassy pond. But the views are immense. Istanbul is another city said to have been built on seven hills as the Byzantines, the Romans and the Ottomans all expanded its reach and left their marks. We pass Sultanahmet and Seraglio Point, a soaring riot of minarets and domes, with three world famous sights – The Blue Mosque, Haghia Sophia and Topkapi – all in a row, a breathtaking cultural jackpot.

There are remains of towering aqueducts that brought water here and stored it in reservoirs such as the extraordinary underground Basilica Cistern, its 336 columns like a fantasy from Harry Potter. The mighty Theodosian walls, once stretching from the Marmara to the Golden Horn dissect the city still. It’s not surprising perhaps given they stood protecting what was then Constantinople for almost 1,000 years.

Istanbul looks defiantly forward too. Contemporary Turkish life flourishes along the Golden Horn. Buzzing cafes and bars bask in sunlight with Galata Tower behind. The upper tier of Galata Bridge is lined with fishermen and the occasional fisherwoman, while the lower walkway is a hive of activity lured by cheap street food and floating fish stalls.

Next up, the modern towers and cables of the Golden Horn Metro Bridge which can swing open to allow taller ships through. Everywhere there’s some eye-catching diversion. Our captain has to hit the brakes (metaphorically) as a sea plane lands in front of us. The decommissioned submarine tied up at a museum on the banks. There are ramshackle ship yards and great houses. One waterfront yali (or mansion) was for sale here for €100 million back in 2013.

Fellow passengers board and disembark at various stops. Miniatürk seems particularly popular: a model of the city with 100 miniatures of famous Istanbul landmarks. We carve a gentle u-turn and hum back towards Kabatas. The sinking sum gives buildings the other-worldy glow that compels cinematographers to the magic hour.

Suddenly, we’re in the movie, Istanbul as its exotic central character, hiding the labyrinthine Grand Bazaar, showing off myriad mosques, its riches and mysteries playing to us across this ancient waterway. And we’ve the best seat in the house.

Tom Kelly flew with Turkish Airlines which has direct flights 14 times a week from Dublin to Istanbul. turkishairlines.com. He stayed at the five-star Marmara Taksim Hotel, themarmarahotels.com

How to turn heads this spring

Covid-19 crisis: ‘We have had to learn a new disease, new vocabulary, new skills’
7