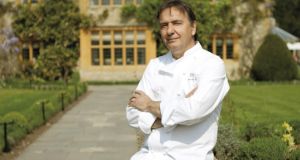 Walnut Grove, Loire Valley
Walnut Grove is a luxurious gîte in the heart of the Loire valley that offers five-day courses that include everything from basic knife skills and bread-making to gourmet dishes such as Collops of monkfish glazed with a herb, mustard and brioche crust. You’ll visit the 19th-century mill where the owners produce their buckwheat flour and on the last day you’ll present your own culinary creations, Masterchef-style. Courses run from April-November and cost from €1,595 per person. walnutgrovecookery.com
Fly Aer Lingus to Paris then TGV to Laval (90 minutes; €50)

Diane Kochilas, Ikaria
Greek-American celebrity chef Diane Kochilas is running three six-day courses this year at a country house in a mountain village on the island of Ikariain, Greece. As well as four-to-five hours of on-hand tuition every day, you’ll visit with local beekeepers, naturalists and shepherds, where you’ll milk goats and learn how to make kathoura, Ikaria’s own cheese. Courses run from June 21st-27th, June 28th-July 4th and July 5th-11th and cost €2241. dianekochilas.com
Fly Aer Lingus to Athens for €149 each way; Olympic Air (olympicair.com) to Ikaria from €77

La Maison Arabe, Marrakech
Learn to cook delicious tagines and sweet and savoury briouats (pastries) in the purpose-built cookery school opened by La Maison Arabe, one of Marrakech’s most beautiful riad hotels. The workshops – usually run on a half-day basis and for groups of up to 16 people, each at their own work station – are led by a dada (traditional Moroccan cook). Private workshops are also available for a maximum of eight participants. Half-day courses cost €54, private courses are €450 per group. Rooms from €180. lamaisonarabe.com
Fly Ryanair to Marrakech from €60 each way

Anna Tasca Lanza, Sicily
There’s no better way to learn the secrets of proper Sicilian cuisine than in the kitchens of the 19th-century Regaleali-Tasca d’Almerita estate, where the courses on offer include guided visits to the vegetable garden, a tour of the estate’s winery, classes on how to make pecorino and ricotta cheese as well as lessons on making classic Sicilian dishes. Three- to five-day courses cost €1,450/€2,800, including accommodation. annatascalanza.com
Fly Aer Lingus to Catania; the estate is roughly a two-hour drive from the airport

Ferrandi Paris
Ferrandi Paris, the French School of Culinary Arts, is where professional chefs go to train, but in summer they run a host of courses for both the professional and amateur chef including cooking with seasonal produce (three days; €1,200); French Breads & Viennoiseries (five days; €2,000); and two courses devoted to the macaron: an introductory course (three days; €900) and an advanced course (three/four days; €1,600/€2,000). ferrandi-paris.fr
Fly Aer Lingus or Ryanair to Paris

International Culinary Center, New York
If you’re in the Big Apple and fancy a day course on bagel making – but also knife skills, tapas or patés – the International Culinary Center is the place to go. There are also longer intensive courses available, such as Hiroko Shimbo’s five-day Essentials of Japanese Cuisine ($1,550/€1,250), where you’ll learn the secrets to making great sushi and sashimi, as well as cooking with seaweeds and rice. Day courses $195 (€157). internationalculinarycenter.com
Fly Aer Lingus to New York

Culinary Institute of America, California
The Culinary Institute of America’s California HQ – in a beautiful mansion surrounded by vineyards in the heart of the Napa Valley – is the perfect setting for a foodie boot camp. The CIA runs two- to five-day cooking camps on a range of subjects: recommended is the five-day Flavours of Wine Country, where you learn the basics of NoCal cuisine and how to pair each dish with the appropriate (local) wine. From $2,195 (€1,770). ciachef.edu
Fly Aer Lingus to San Francisco

Raymond Blanc, Oxford
If you’re going to learn about cooking, you may as well learn from the best. There is a wide selection of courses to choose from, including a four-day immersion course where students learn how to select, prepare and present starters, meat, seafood and desserts in the kitchen of the Michelin-starred Le Manoir Aux Quat’Saisons in Oxford. It costs £1,540 (€1,945); if you want accommodation, it’ll cost £4,300 (€5,435). belmond.com
Take the train from London Paddington (£24 (€30); one hour)

Catacurian, Spain
Two hours southwest of Barcelona, in the wine-producing region of El Priorat, is this wonderful cookery school that runs a range of classes from half-day courses to four-day full-immersion programmes. Here, you’ll get a hands-on lesson in the secrets of Catalan cuisine, enjoy full tasting winery tours and sample a range of olive oils. One-day course €150, four-day course (including accommodation and transport from Barcelona) €1,400. catacurian.com
Fly Aer Lingus to Barcelona

Thai House Cooking School, Bangkok
Prasan (‘Pip’) Fargrajang has been teaching ‘farang’ the secrets of traditional Thai cuisine since 1991. The house, a beautiful Ayuthaya-style place about 22km north of Bangkok in Nonthaburi (they’ll pick you up from your hotel by bus or by boat), is the perfect spot to while away a couple of days learning how to make the perfect Thai curry and pad thai. One-, two- or three-day courses from €95/€220/€410 including accommodation and transfers. thaihouse.co.th
Fly Etihad or Emirates to Bangkok