An Irishwoman’s Diary about rural decline and rural revival 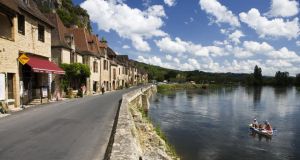 The Périgord-Dordogne region in southwest France is what the French term la France profonde, literally “deep France” – in other words, bucolic and strikingly empty France.

Except for the school vacation, from Bastille Day to late August, you’d imagine a neutron bomb or the Black Death had hovered over these fertile hills and exquisite, honeyed stone villages, each with its solemn memorial to Resistance martyrs from the last war, each apparently deserted.

Yet it is bountifully farmed, as orchards and pastures show, and also lovely, as a recent visit to tiny St Mesmin proved: fairytale gorgeous, with castles, caves of palaeolithic art and farmers’ markets.

Staying nearby and canoeing down the Vezère river recently, I felt a bit like palaeolithic man myself – outnumbered by flourishing flora and fauna, hawks and other raptors, neon-blue dragonflies and butterflies, fighting stag beetles and millipedes as frilly as false eyelashes. We drifted silently past ravishing chateaux and echoing woods.

On the Auvezère river, a magnificent ruined 13th century forge testifies to once denser population from at time when France was the richest and most populous country in Europe. Limousin cows nuzzle calves. A few tractors of hay rumble past the local Bar-Restaurant Des Forges at dusk before heading home, trailed by whirling swifts. Medieval churches of turrets and steeples remain open, but empty. Where are the people?

“Every French village needs a few score kids to support a school and the holy trinity of butcher, baker and bar-bistro. Once the tissue of local life is frayed, the whole thing just goes,” says Brent Gregston, an American expatriate journalist who holidays here. While Provence and Haute-Savoie are recession-proof thanks to beaches and skiing, the Auvergne and Cévennes are empty as Périgord off-season.

The French have fretted about désertification or the “rural exodus” for decades. A largely secular country, France enjoyed lowest-birthrate-in-Europe status since the revolution, until it introduced cash breaks for big families.

Familles nombreuses get free holiday travel, tax rebates, education incentives, healthcare, cinema discounts, direct cash benefits, you name it. Yet a 1980 billboard campaign featuring cute babies in close-up over the message “There’s more to life than just sex” flopped miserably, as we could have predicted, and it still has the lowest rural population density in Europe.

Frankly, farming is at a stage of evolution that no longer appeals. Only one farm in four is taken on by the next generation. Between 1967 and 1997, 60 percent of farms of less than 20 hectares disappeared, while larger ones doubled in size. A Limousin village was recently up for sale at around €300,000: an entire village, waiting for a Korean cult.

So thank God, said the Périgourdins, for retired Brits who traditionally favoured Périgord-Dordogne for their golden years. Butchanges in currency rates ate into British pensions, causing another exodus, with a knock-on effect on local businesses.

Yet hopeful signs of a reversal may be glimpsed. Each corner of la France profonde has its “néo-ruraux” - Generation ‘68-ers and “baba cools” – neo-hippies selling hand-made soaps and candles at markets, affluent Dutch and Swiss, also weekending Parisians.

Yes, things are improving. Guy Bouchard, incoming mayor of tiny St Mesmin, is a retired general who plants a tree for every baby born in the commune, and reports every newly arrived couple in his magazine. Mayor Bouchard speaks good English and Russian, and as a militant of the back-to-the-country movement is universally admired. He oversaw peacemaking in Cold War Berlin and Darfur, but now presides over village council meetings on the new urinoir.

A young French couple just relocated to Chacord, where they welcome colonie de vacances visitors. So do our hosts at Savignac Ledrier, writer-teachers David and Michèle Lambert, who run language and writing courses. Their neighbors, Dave Bickenson from Bristol and his Romanian wife, Claudia, sell new-laid eggs and home-dug potatoes, and let out rooms in their 18th century manoir.

“Yes, it’s quiet here. But we went to a town barbecue last weekend in Saint Mesmin attended by most of the 310-strong commune population! At a guess some 70 percent were retired,” Dave reports.

Is it too early to call this a recovery?