Will you take a day off work on March 8th to ‘strike 4 repeal’?

Group 'Strike 4 Repeal,' are asking for a referendum on repealing the eighth amendment, asking for people to strike on the 8th of March if not granted. Video: Strike 4 Repeal / Cian Brennan 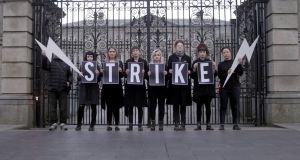 Strike 4 Repeal: a video promoting the the campaign, inspired by action taken by women in Poland, has been viewed more than 430,000 times

Within a week of launching, the Strike 4 Repeal campaign, which aims to encourage women in Ireland to withdraw their labour on International Women’s Day, March 8th, the campaign’s video has been viewed more than 430,000 times.

The movement is inspired by women in Poland, who downed tools last October, refused to perform domestic chores and wore black in a successful campaign against the tightening of abortion laws there. The Strike 4 Repeal group hopes to persuade the Government to hold a referendum on the Eighth Amendment, which guarantees the right to life of the unborn, and was inserted into the Constitution after a referendum on the issue in 1983.

Statistics show at least nine women travel each day to the UK and elsewhere for abortions from Ireland to access abortions and the issue is the subject of debate at the Citizens’ Assembly, which will make a recommendation after considering some of the 13,000 submissions it has received from the public.

While its campaign video has been seen by 430,000 people, the Strike 4 Repeal campaign has featured in news and print media all over the world, including Iraqi Kurdistan, the US and Croatia.

The campaign is based on “non-traditional strike actions for human rights that we have witnessed in other parts of the world. The strike will not be an industrial strike in the traditional sense, but could include taking an annual leave day off work, refraining from domestic work for the day, wearing black in solidarity or staging a walkout during your lunch break,” the organisers said.

“Our demand is that the Irish Government call a referendum to repeal the Eighth Amendment by the 8th of March. If not, Ireland will strike.”

Abortion is prohibited in Ireland where the Constitution makes it illegal unless a pregnancy endangers a woman’s life. Any woman who wilfully terminates her pregnancy can face up to 14 years in prison.

“We’ve had an overwhelming amount of enthusiasm from secondary school and college students, who are now planning their own ways to show solidarity and/or strike on the 8th, and several pubs and cafes in Dublin have come on board already to close for the day to mark the strike,” Ms Brophy said.

“We’ve been overwhelmed and heartened by the support for the strike so far, in particular from students, and from regional and rural groups. The enthusiasm around the country has shown us the appetite for action from the Government on this issue. People want a referendum on the Eighth Amendment.”

The group has just launched a website – strike4repeal.org – and will hold a meeting on Thursday, February 2nd, in the Edmund Burke Theatre, Trinity College Dublin at 7pm.

Emma Dabiri: ‘I wouldn't want my children to experience what I did in Ireland’