‘We hate indifference’: the rise of Tiger Stores

From their Danish base, Lennart Lajboschitz and his wife, Suz, have sold their vision of design-led, low-cost retail all over the world and reinvented the image of the pound shop

Denmark's Tiger retail chain has reinvented the image of the pound shop. Gillian Maxwell talks about bringing the retailer to Ireland, their best sellers and why it's been such a success. 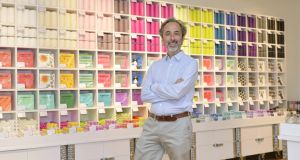 Lennart Lajboschitz: ‘If you try 10 things and eight don’t succeed, most people aren’t happy. But I’m happy if two things out of 10 succeed, and the rest is experience’ 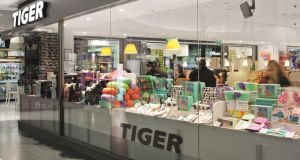 Lennart Lajboschitz is the genius behind Tiger Stores, one of those rare international retail miracle tales of businesses that thrived through the downturn. In 2013 there was 56 per cent growth throughout the global company. People say that Tiger is a mixture of Ikea and a €1 store. But it’s bigger than that.

“We had 39 million customers last year,” says Lajboschitz. At the company’s headquarters in Copenhagen, one of his chief designers, Pi Vielsted, and Tiger’s marketing director, Tina Schwarz, say things such as, “Lennart is very, very creative and very, very unpredictable. He likes to surprise people. He doesn’t do administration.”

So, of course, you are expecting some kind of Wall Street monster. Instead, when you are shown to one of Denmark’s art deco office buildings, complete with its original glass lift, you find that Lajboschitz is a small man in a grey sweater, using the photocopier. He takes you to a boardroom that looks hardly used. These days he is still on the board of Tiger but has stepped down from daily operations.

He has just bought a church as a personal project. It will probably be used as a social centre, because he is worried about the isolation of modern life.

The SpilBar is part of the Tiger building, which also contains its office and one of its shops on the busiest shopping street in Copenhagen. Spil is Danish for “game”. There is a ping pong table (Lajboschitz is an enthusiast). There are board games and chess. “I play chess every day on the internet,” he says.

Coffee in the SpilBar is only 10 kroner (€1.34), which in Copenhagen is very cheap indeed. On a wet afternoon it is full of people, many of them teenagers.

“I’m not a seller,” he says quietly. “ I was so-so in school. I had no education in finance or in business. But the thing that formed me was my childhood.”

Lajboschitz’s father was constantly working, and from home. Later, Lennart and his wife, Suz – the co-founder and creative director of Tiger – started selling umbrellas and belts from a stall in flea markets and at rock festivals. They still sell at the Roskilde festival once a year.

“That was a very important time, the flea markets,” says Lennart. “You were close to reality. The fish must get to know the water he’s swimming in.”

As the first of their four children came along, the flea markets and the rock festivals were not such a convenient way to work any more. In 1998 Lennart and Suz opened a shop called Zebra. “It was a clearance shop,” he says. Then, in 1995, they opened an early pop-up shop. When they went on holiday, they left this second shop in the charge of Lennart’s brother’s girlfriend. But she couldn’t find the prices on anything and phoned them in a panic. Lennart told her to charge ten kroner for each and every item. Ten kroner was worth about £1 sterling in those days. The Danish slang for 10 kroner – tier – is also the Danish word for Tiger. A star was born.

The Zebra office overlooks the SpilBar and is quite unglamorous and friendly, with a collection of umbrellas in reception for communal use. When Pi Vielsted came to work for the company 8½ years ago, “there were less than 20 of us here. Now we are about 150,” she says.

China is the biggest supplier of Tiger goods, and the firm’s buyers go to fairs there twice a year. There are dozens of samples piled up on floors and desks; they might be changed by Tiger’s own designers. There is a very basic shelving unit where each shelf is marked with a code for a coming month. There are two design campaigns per month.

“Each campaign will have its own design theme,” says Vielsted. She designed the fox lunchbox for kids and the drawing of a wizard for Christmas.

“The pace is quite fast and quite fun,” says Vielsted. “It allows you to experiment. I did a design yesterday and they’re going to make 45,000 of the item. But you can’t think about that.”

It is a bit of a thrill to meet the other senior designer, Marlene Frolund, who created the cards that feature a funny-looking man in a vest, which have proved a huge hit all over the world. Frolund says that people love the man because he is vulnerable and not handsome.

We’ve gone past the Japanese department now. Eight television stations covered the opening of the first Tiger shop in Japan, in Osaka. There was a queue of customers a kilometre long. The Tiger people had to increase the number of tills in the shop from four to 16, and they sold one month’s worth of stock in two days.

Next year there will be a Tiger shop in New York – “we hope in May,” says Tina Schwarz.

After a brief discussion on the growth of private healthcare in Denmark – this is a very Tiger discussion – Schwarz explains that there are “2,700 active items” in the Tiger shops at any one time. And Suz has seen and approved every single one of them.

“Some of our strength lies in that,” says Schwarz. “That it’s the same person, the same pair of eyes, the same aesthetic. We’re trying to change it now [as the company is so big]. It is very hard.”

In 2005 Tiger opened in the UK – “very modestly, in Basingstoke”, as Schwarz puts it. “Lennart met a friend of a friend: a Dane living in England.” Now there is a Tiger shop on Oxford Street and 36 shops across the UK.

Irish married couple Gillian Maxwell and Niall Stringer had their first Tiger experience while shopping in London, and they brought the concept back to Ireland in 2011.

There are four Tiger shops in Iceland. Lennart and Suz went on holiday there and said: “This is so beautiful, let’s open a shop here.”

There was no market research, but then there never is. “I think most people think too much about what could go wrong,” says Lennart. “If you try 10 things and eight don’t succeed, most people aren’t happy. But I’m happy if two things out of 10 succeed, and the rest is experience.”

Similarly, in appointing the international partners (called franchisees in other companies, but here they are “joint- venture” partners), Tiger looks for different attributes.

“It’s about your potential, not about what you have achieved before, or whether you can calculate. That is not interesting,” says Lennart.

But this is not to say that Tiger headquarters are laid-back about how their business is handled. “Something we hate and something we fight is indifference,” says Lennart. There is also a firm belief in the importance – the morality, almost – of design.

“In my opinion everything you surround yourself with has an affect on you.” This sounds like William Morris – of whom Lennart has not heard. It also makes you hope that Lennart never comes to Ireland. “I’ve been,” he says quietly.

We walk from the SpilBar in the pouring rain, passing a big kebab house, Shawarma. “We call that the boardroom, because we have all our best ideas there,” he says. “In a board meeting you can be so effective that you can crush all innovation.You look at the letters you write, but you have to look at the space between the letters as well.”

I say that this is very Zen.

“It’s learning by doing,” says Lennart. But of course that is very Zen as well.

Gillian Maxwell and Niall Stringer opened the first Tiger stores in Ireland in 2011, and, at the beginning of this month they won the overall prize for best company at the Retail Excellence Ireland awards.

Since launching their first Tiger store in Dún Laoghaire Shopping Centre in 2011, they have been opening shops all over Ireland. Their latest just opened its doors in the Swan Centre, Rathmines. They are in charge of Tiger on the entire island of Ireland.