The Yes Woman: Clickety-clack, knitting’s back

Despite the injuries and the fact I accidentally knit my scarf to my cardigan, I find that I love this ‘old’ hobby 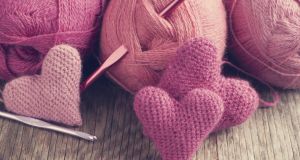 ‘I soon find myself thinking about my knitting at home as I go about my daily business.’ Photograph: Thinkstock

It doesn’t seem coincidental that the language of knitting has a whiff of narcotics about it. Knitters use needles and work in lines; if there is any productive form of addiction, knitting must be it. Although it has become increasingly popular among younger people in recent years, it probably still suffers a little from a reputation as being stuffy and old.

Knitting might bring to mind stereotypical grandmother figures with blue rinses and descending pop socks, using phrases such as “there’s great drying out today” while they stare philosophically out the window and into a gale that could wrench trees from the earth. The truth is, however, that this lovely craft is having a bit of a Lazarus moment among younger people and gaining an increasing number of male advocates; cardigans and kitsch 1970s-style fisherman jumpers are a wardrobe staple frequently seen nestling beneath the preened facial hair of hipsters countrywide.

It might be an influence of the recession, which generally caused a resurgence in self-sufficiency and viewing possessions as less casually replaceable than we considered them during boom time. Whatever the cause, knitting is making a comeback.

Every year, the Innocent smoothie company teams up with Age Action Ireland to raise money for their Care and Repair Programme, which sends volunteers into the homes of elderly people and provides a DIY service, fitting hand rails, changing light bulbs and generally doing little jobs that make a big difference. To raise funds, Innocent runs what it calls The Big Knit, putting out a public call for knitters all over the country to make tiny hats for the top of smoothie bottles, which are then distributed in shops. For each one sold, 30 cent goes to Age Action Ireland; €100,000 has been raised so far.

Since having a new creative outlet can only be good, this week I’ve said yes to learning to knit. Luckily at last week’s Irish-language class, I ran into Bella Fitzpatrick, founder of Trinity College’s now incredibly popular knitting society, at a knitting event held by Innocent. Fitzpatrick showed me the ropes, and I was instantly in thrall to the click-clack of needles and dashed off to buy supplies. That evening was spent incurring various knitting- related injuries, including the near loss of an eye and a rather ungraceful fall caused by slipping on a rogue ball of yarn.

Recognising when one is beaten is important, so I head to The Constant Knitter on Dublin’s Francis Street to enlist the help of Rosemary Murphy, shop owner and veteran knitter. The shop is a charming jumble of colours and textures, and offers every tool and material for any form of textile craft you can think of, as well as knitting and other classes upstairs. I bring the maladjusted scarf that I have been working on for Murphy’s inspection, and feel terribly proud of myself when she declares that, for a novice, I have done a good job.

Looking around The Constant Knitter at the complex creations of Murphy and the teachers based in the shop makes my scarf look like something that has spent too much quality time with a pugnacious zoo animal, but it is also inspiring. Knitting is one of the few skills that will allow you to produce something immediately, although you can spend a lifetime widening your skill set and becoming better. Still, nothing motivates like a physical manifestation of one’s efforts, and Murphyhas assured me, despite the damning evidence to the contrary, that I am fully capable of making a hat for a Christmas gift.

I find myself thinking about my knitting at home as I go about my daily business. I return with twitchy fingers and work on it as I watch a film or read. Watching that slightly drunken-looking scarf – a duck-egg blue affair – grow longer fills me with great delight. Eventually I finish it. Yes, it is too wide and smotheringly thick, and at one point I have to tear out a third of it and start again because I have somehow manage to knit it into the cardigan I am wearing. I realise this when I stand up to make a cup of tea, only to find the scarf attached to me. However, it’s mine and I’ll wear it with pride. If you happen to see me in it, do be kind.