The road less travelled: one family ditches the car

After our 1996 Toyota went kaput, we decided to go without. Commuting, ferrying kids, shopping and holidaying abroad? It’s all possible with a little ingenuity 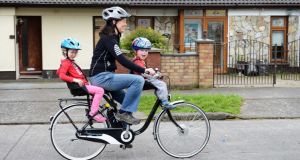 Cliona Brophy on her e-bike with her children Bobby (3) and Alice (5), in Clondalkin, Dublin. Photograph: Eric Luke

I thought that getting woken up at 3.30am by a phone call from a neighbour who had spotted two guys trying to break into our car for the third time in a year last December was the straw breaking the camel’s back.

However, our 1996 Toyota was to make loud complaints the following afternoon, stubbornly refusing to move on the N81 in Tallaght. No amount of crying by the five- year-old and three-year-old children in the back could cajole this particular camel home. Three gardaí came to assist it into a safe parking spot, during which it used up its last gasps. Later that evening, having finally made it home, relaxing with a glass of wine, I heard myself wondering aloud to my husband whether we could actually do without the car for good.

Some might think we like to do things the hard way. For example, although we live in west Dublin, where groceries are not hard to come by, we have allotments to grow our own vegetables. My husband likes to make sausages and charcuterie, we make all our own bread, use wine kits and I’ve even been known to make tasty cheese. But do we really need to go as far as living without a car? We decided to look into all the pros and cons.

Firstly, our car was so old it owed us nothing: it did, however, cost us quite enough. Looking at replacing it, even with an only slightly younger model, would already add to our financial burden. What would be a viable alternative?

In order to make an informed choice, we looked at when we used the car. Like most families, we used it for shopping, visiting family, days out and for camping holidays abroad.

Unlike many, we did not need it for commuting – my husband has used electric bikes for his 20-mile round trip to work for years, and I work from home. We don’t use a car for school runs.

Finding a solution to shopping was straightforward enough – online deliveries in bulk, occasional trips to local shops by a bike equipped with panniers, and signing up with our local milkman took care of this. We freeze or can the vegetables we grow in our allotment.

Trips to family on the other side of the city might take a bit longer, but public transport makes it doable. The advent of Dublin Bus real-time information and the Transport for Ireland website, coupled with the use of Leap Cards to keep the cost down, makes our two-bus trip easy for us, and it is exciting for the children.

Days out around the city are also taken care of by virtue of public transport, using family day rambler tickets, or the Dublin Bike Scheme when we are without the children.

How would I cope with short trips to the local library or swimming pool with both the children on my own? This is where we started to get clever.

In 2008, my husband, Shaun, contacted Paul Gogarty, then a Green Party TD, to ask about the possibility of setting up a tax incentive for bike users in Ireland.

Two questions were asked of the late Brian Lenihan in the Dáil, and then the idea was introduced in the next budget.

Only now is my husband finally benefiting personally from the cycle-to-work scheme. He has purchased a new Momentum electric bike from Greenaer and left his old e-bike to me.

We already had bike seats for the children – now I could put the five-year-old on the back and the three-year-old on the child seat in front. The motor means I’m able to whizz along even if it’s windy or uphill. The children love it – the older one sings a cycling song she has made up and the little one points out everything he sees.

We should be able to travel like this until they can cycle themselves. If the weather is wet, we can either change our minds or take public transport. Or, if it’s a really necessary journey, we can take a taxi: as we won’t be paying car tax, insurance or maintenance, it won’t feel like an extravagance.

For days out as a family, we can use the two electric bikes and take routes calculated via the website Cyclestreets.net, which shows a choice of routes across Ireland – quiet, fast or balanced – allowing us to safely and enjoyably get to plenty of interesting destinations. With the addition of a bike trailer from Velo.ie we have even looked at an overnight camping trip as far away as Virginia, Co Cavan.

There will, of course, be times when using a car as a family is necessary. For those times, I have signed up with Go-Car, which has a number of vehicles available by the hour to members in Dublin and Cork cities. My nearest pick-up point is a bus ride away, although I hope in the future there will be one nearer.

Our preferred type of holiday – camping in France with our own gear – presented a problem. We looked at many options: shipping our gear in advance, buying a car for the summer months, even ditching this type of holiday for good. Then, last December, a solution fell into our laps with the introduction of the new LD Lines ferry to St Nazaire. This port is at the start of a beautiful cycle route: La Loire à Vélo. We have booked to go at the end of June with our two bikes, two children and camping gear. We may only cycle a short bit and set up camp for two weeks at the beach; we may, if the weather is bad, board a train south or east.

The Momentum can go for up to 60km before needing to be recharged. With that range, we could cycle as far as Saumur and revisit some favourite haunts of our honeymoon. I have now bought a new Momentum for myself, as my inherited e-bike had a much shorter range after eight years.

Five months in and we have survived a very wet and cold start to the year without bemoaning our carless state. A few plans were changed due to the wind and rain, but by using the rainfall radar on Met.ie we were able to avoid the worst weather. In any case, the children love walking in rain, as long as they are allowed to jump in the puddles.

We have got slightly better at getting four people and two large bikes out of the house – we can do it in less than half an hour. Car rental on two weekends has cost us only €15 per day with Enterprise Car Rental, and we have purchased a yearly car hire excess insurance for €49.99.

Not only do we not need a car, but even if we kept the costs as low as possible, we would be foolish to buy another one with all these solutions available to us.

The relief alone of not worrying about a car being damaged by vandals outside our house is worth it. Instead of being daunted by the prospect of a new year with car loans and associated costs and worries, we are looking forward to a new phase in our lives: car-free and carefree.