Tara Flynn: You don’t talk about abortion in Ireland. But I have to

When my turn came, I couldn’t tell my amazing mother or my female doctor. And it’s not because I’m ashamed 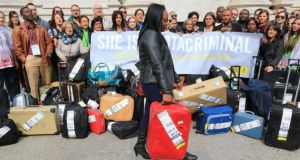 This is none of your business. I don’t want to share this any more than I want to share any other of my private medical details. TMI, you’re thinking, and you’re right: this is too much information. I’m angry that I have to share it. Scared. But if I don’t, I’m allowing myself to be silenced by the judgment of others. We’ve had enough of that here.

This week I’ve been called brave, a hero. I’ve also been called an unrepentant murderer. In 2006 I had an abortion. This week I spoke about it.

The decision to travel was not a difficult one. I was 37, single, and both work and income were scarce. I had taken a morning-after pill and couldn’t possibly be pregnant. Not me. There was no bump; nothing to see. But something was up, so I did a pregnancy test. Then I did three more. All positive. Me, not so much. My ears rang. I could hear my own heart thumping. Panic. I couldn’t breathe. My world caved in. I felt completely and utterly trapped. Completely and utterly alone.

I hadn’t wanted to be pregnant and felt in no way capable of parenting. The term is “choice”, but it didn’t feel like having one. If I had been forced to continue with the pregnancy, I cannot with certainty say that I would still be here. That’s not hyperbole; that’s the truth. Stark to see it written down, but there it is. Because abortion is illegal in Ireland and “doesn’t happen here”, I would have to travel as early as possible. It would take more than a week to organise booking and getting myself to a clinic in the Netherlands, which a friend said was cheaper and offered excellent care. Now all I had to do was lie to almost everyone I knew.

As I boarded an early flight full of tourists and business people, I felt something crumpled in my pocket. It was the leaflet that comes with the morning-after pill. I read and re-read it on the flight.

Amsterdam. Train to Utrecht. Map of Utrecht, clinic. Quiet, clean waiting room. Young girls with boyfriends, older women with best friends, only one person there alone. Me. When you have to leave your country for the medical care you need, your friends may not be able to afford to come with you. Besides, you’re not sure who it’s safe to tell.

Not even your mother

When it’s your turn, you see a doctor. Then a counsellor asks how you are, who you’ve told, if you’ve told your mum. I hadn’t. You don’t talk about abortion in Ireland, not even to the most amazing woman in your life.

To this day I haven’t told my doctor. She may be completely supportive, but most women don’t want to risk being judged in the safe space that is their doctor’s office at a moment in which they might already be vulnerable.

The procedure. Kind doctors. Compassion. “Are you going to be all right getting back to the airport? How will you get there?” Picking me up post-procedure and putting me back in bed when I tried to leave too soon and collapsed. I couldn’t get back to Ireland, to my loved ones, quickly enough. Relief. Relief. Tears. Relief.

A recliner at the airport, my coat over me. A friend to pick me up when I landed. Relief.

But the second I landed, I became a criminal. Guilty. Shameful. A killer. It didn’t matter that I knew I was none of those things, like so many thousands before me (and an average of 12 every day since). I kept my mouth shut, like a good woman. I didn’t want to attract the vitriol so many who say their focus is life feel free to dispense.

I wasn’t ashamed; I made the most responsible choice I could have made at that time and in those circumstances. But I was shamed into silence. This leads to secrets, lies and real, live, actual women putting themselves at risk for the want of compassionate care. Pretending it isn’t happening isn’t helping. It’s time to talk, as Róisín Ingle did in this newspaper on Saturday.

And so, I decided to put a name and a face to just one person who has made the journey that means we don’t have to face facts here. These are not abstract “women”. It doesn’t take a statistician to point out that you know someone who has made that journey. You do, you know.

Last week, I decided to tell my story at the Amnesty Ireland’s My Body, My Rights event at Electric Picnic. So now you know I’m one of them.

Just one. Thousands have travelled. Thousands have risked 14 years in prison for buying pills online. Thousands more have put their lives at risk by doing things that wouldn’t seem out of place in a Victorian horror story. Except it’s happening today. Right now. We have to stop pretending it isn’t, or that we live in a fairy-tale land where this kind of care will never be needed. It always has, and it always will.

It’s time to stand with all those women – women in your life, right now – who’ve had to make the journey I have. Time to stop being a hypothesis, or a topic for someone else’s debate, or one of the invisible ones. It’s time to talk.

Even though it’s really none of your business.