Broadside: ‘It would have been much better for my mum’s mental and physical health if she had had the abortion,’ says Maria 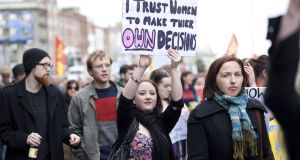 Those of us involved in the fight to win reproductive rights for Irish women are familiar with the term “abortion survivor”. This refers to an anti-choice advocate who claims to have been born following an unsuccessful abortion. Smiling pictures of these people are trotted out alongside quotes about being “saved by the sheer power of Jesus”. The existence of such Bible-thumpers is supposed to act as proof that women shouldn’t have abortion rights.

I have a good friend whose life is the result of a failed abortion: an accomplished scientist, and a warm, witty, life-affirming person. She is also firmly pro-choice. Like me, she’s from a country where women do not have abortion rights. She generously agreed to share her story. Due to potential repercussions in her community, she must remain anonymous.

She said, “Yeah, I did try to abort you with pills.”

And that’s how I learned about it. It pissed me off, because as a teenager no one wants you, and on top of that – your mother didn’t want you either [laughs].

Back then, politically and economically, the country wasn’t in good shape. Young couples couldn’t afford to have many children. My father had to work in another town, far from my mum and my siblings. My father was a political activist and there was always a chance he would be put in prison or would “disappear”.

My mum was one of those types to get very depressed after giving birth. She was already pretty depressed. When she learned she was pregnant, she was on medication, far from my dad, she couldn’t afford another kid and didn’t want another kid. She couldn’t handle it basically. And it was true, because after I was born, my mother couldn’t take care of me for about six months or a year. I was raised mostly by my older brother.

At maybe two months she tried to abort. She went to a family doctor. It wasn’t legal. It would only have been legal if she was in a serious physical situation, not mental. She became even more depressed after I was born. She became suicidal. She was like that for a long time.

I was never mad at her. When I was a teenager I couldn’t understand why she didn’t want me. But when you study the country, the situation . . . I give every right to my mum. If I were her, I probably would have aborted. It has nothing to do with her maternal instincts – she already had two kids. It’s just that it wasn’t the right time.

I turned out okay and I’m happy to have experienced life. But now that I have experienced it, I know how it is. When you’re not born, you have no idea. You don’t care, because you don’t know. Am I glad that she didn’t succeed? I don’t really care. I am glad I am alive, but not necessarily because I am glad my mother didn’t do it. I shouldn’t have a say in it. It’s her body. It’s her choice.

It would have been much better for my mum’s mental and physical health if she had had the abortion. It was never an idea for me that women shouldn’t be given the right to abort because their kids could grow up, get an education, get a good life, all that.

When it comes to anti-abortion laws, if it’s not religious or it’s not political, it’s always very sentimental: it makes your eyes teary, but it doesn’t solve many women’s problems.

Maybe because women are ashamed or they feel guilty, they don’t talk about how hard pregnancy is. I know it was hard for my mum. Depression, hormones, breastfeeding . . . everything.

Not being religious probably has a lot to do with how I feel about abortion. It helped me look at my mother from her personal perspective. I look at her as a human being, not as a woman that should be, must be, a mother.

I don’t consider myself an “abortion survivor”. That has a bad tone. If you want to articulate it that way – that my mum’s abortion didn’t work and that’s why I’m alive – yes. But I don’t label myself like that. I just got lucky.

If you want to end your pregnancy, you should be able to do it legally, without being judged, without feeling guilty, without jumping a lot of hurdles. I support a woman’s right to choose.