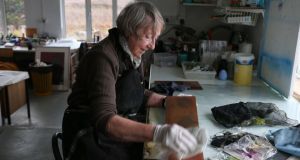 When Mo Irwin moved as a young and only child to Ireland from India, her art lessons at home in Co Wicklow comprised nothing more than simple observation.

“I was nine years old and sharing a governess with cousins, but my mother felt I needed a bit more than the ‘three Rs’,”she says. “So we signed up with the Parents National Educational Union, which sent out wonderful books, along with mezzo-tinted reproductions of Old Masters, and they were placed in front of me to look at for up to 15 or 20 minutes at a time,”she says.

“Later on, when I was studying languages at college and travelling, I’d recognise the Reubens or Rembrandt immediately in every detail, and it dawned on me that I had been given a very effective early introduction to love of fine art.”

That love never left her, during all the years when her parents – returned emigrants after several decades with the Indian civil service – had urged her to find a “saleable” career.

Sitting in the kitchen of her Claddaghduff home in Connemara, with one eye out to Omey island and the Atlantic beyond, she giggles as she remembers how a priest’s words changed her life.“They had let me take up lessons with Lilian Davidson RHA in Dublin’s Earlsfort Terrace, and she taught me classical drawing and control of watercolour, which is a very difficult medium. Lilian had sisters who wore wonderful hats, who would drift in and talk about the theatre while were were at class. There was nothing very drilled or formal about it all, and that made you want to go back.”

“Even when I was in university in Trinity – after I got a dispensation from the Catholic Church to attend – I still kept up Lilian’s classes, and I would design posters for one of the student clubs. But though I pleaded to go to art college, my parents thought that sort of place was frightfully immoral.”

“And then – what do you know – Fr Jack Hanlon, the parish priest in Delgany where we lived, suggested that I should go to Paris after graduation!” 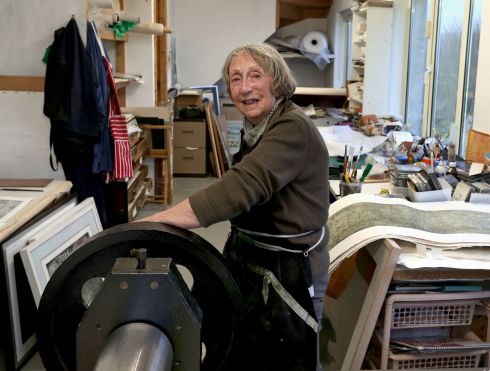 “My parents agreed, because of who he was, and of course they didn’t know that he was recommending a Cubist studio run by André L’Hote,” she laughs. “It was a wonderful experience: you went in and you worked solidly at painting or drawing from a model he would set up on a Monday morning, and he would talk about the picture, and about art and balance and musicality.”

She spent several semesters there, with artists Barbara Warren and Brigid Ganly (now RHA) among her fellow students. When she returned to Ireland, she continued painting, and her work was accepted for the Irish Exhibition of Living Art and by the Oireachtas. Then she fell in love with and married a Scotsman, Rodney West, moved to England and started her family, before returning to Dublin after 11 years.

Her transition from painting to etching and printmaking began during a teacher-training course in the early 1970s at the National College of Art and Design (NCAD). “There were two John Kellys there, and ‘little John Kelly’, as he was known, taught me printmaking and I just loved it,” she says. “Part of that was because when I was painting at home, family demands and housework could get at you. But for printmaking you had to be in a studio, and so I could officially escape!”

It was, and is, a physically demanding medium, working with acid and ink and copper plates on which an image is drawn in reverse. Tonal balance – essential for the printed image – demands patience and repetition, she explains. “So I started working in the Graphic Studio which was in Upper Mount Street, and then the Black Church Print Studio which was up near the Coombe. Sarah Horgan was the director and we all wore leg warmers and mittens as it was so cold. I would take an Alsatian with me if I was going up there at night.”

Irwin had been offered part-time teaching hours in Dún Laoghaire School of Art, and secured a full-time post after her husband became ill. She moved latterly to NCAD, retiring in 1991.

Connemara had been a constant throughout that period of printing and tutoring and rearing her children – three daughters, one son – and it was there in the west that she put down roots.

Family friend Andrea Martin describes how – just as in Dalkey, south Dublin – that Atlantic seaboard home became a magnet for visitors – “bursting with life, love and creativity . . . and full of dogs, children, fishing tackle, sailing gear, art and ideas”. Irwin ordered a printing press for her downstairs studio, and built on a conservatory that captures all compass points.

Continuously mining the rich seam of seascape all around her, she continues to draw inspiration from rock, bog, stone, human footprint – be it a chapel on High Island, a pink granite holy well or wild irises on Omey, or the stone-filtered light through a farmer’s wall. Career highlights include a lifetime achievement award from Galway County Council, a 2007 Clifden Community Arts Festival retrospective of her work and the 2010 Kenny Gallery exhibition she participated in with her daughter, ceramic artist Katharine West.

Food & Drink Quiz: Who invented the chocolate bar as we know it?
6