This week on The Women’s Podcast: election issues, pregnancy tales and domestic violence 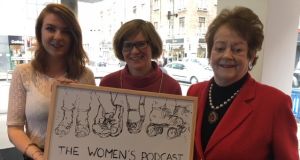 Former Fianna Fail minister Mary O’Rourke has described the behaviour of some of the party’s established male lection candidates towards new female political hopefuls as being “semi-bullying ... territorial with a bit of sexism’.

Talking to Irish Times political reporter Sarah Bardon on The Women’s Podcast, O’Rourke said she had been told about this behaviour while mentoring 11 female Fianna Fail candidates ahead of the election. “Nothing prepares the new woman on the block, where there is an incumbent ... nothing prepares her for this kind of semi-bullying, territorial behaviour.”

Previously outspoken in her opposition to political gender quotas, O’Rourke now says “they have worked”.

“I shouldn’t have admitted it, but I do feel that it has worked,” she told Bardon.

O’Rourke also says some of the women running as a result of the quotas “are going to be great TDs.”

O’Rourke joined National Women’s Council of Ireland director Orla O’Connor and Sophie Kane, a 22-year-old politics graduate from Dublin who will be voting in her first General Election on February 26th, for a discussion about what women want from their politicians.

O’Connor said: “This election is an historic election given the number of female candidates, but it’s been a hard road to get there….There are over 165 women going forward, and that’s absolutely historic.”

According to Kane, the issues important to her as a young, first-time voter are access to abortion, student debt, water charges and housing affordability.

Also on the podcast, a post-Valentine’s Day discussion about The Thin Blue Line, the one that appears on pregnancy tests.

“I’ve always thought myself that you can tell whether you’re ready to be a mother based on the physical location of where you do your pregnancy test,” McNally said.

“My last pregnancy test I did in the toilets in the IMC Cinema… I urinated into a Slush Puppie cup and I was like, ‘Something tells me I’m not ready for motherhood.’

Later in the podcast, Irish Times journalist Anthea McTeirnan spoke to Margaret Martin of Women’s Aid about the challenge of tackling domestic violence in Ireland. She also spoke to a number of women about their experiences in abusive relationships

On Valentine’s Day, Hozier released a video of his single “Cherry Wine”, starring Saoirse Ronan, to highlight the issue of domestic violence. And this week, Safe Ireland will launch an election campaign asking representatives from all political parties to talk about their commitment and plans to make Ireland safer for women and children.

The Women’s Podcast question this week is: Which political posters are catching your eye and why? Tell us what you think by emailing thewomenspodcast@irishtimes.com or messaging us on Facebook or Twitter @ITWomensPodcast.