Letters to my children: Why I wrote this book

At first, Simon Fitzmaurice found writing his book ‘It’s Not Yet Dark’ a deeply frightening task full of painful retrospection but it became a comfort as it grew into a record of his love for his children 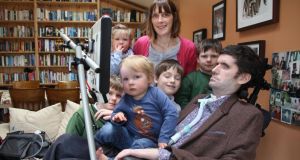 Ruth and I live in the present with our children. But carpe diem is not always fuelled by positivity. In our case the present is our refuge from the future and the past. A necessity born out of fear. We fear the future because death is waiting to ambush any plans. We fear the past because while revisiting happiness we are often jumped by pain. The sense that these are someone else’s dreams. So we live in the day to day with our children, who know no other way.

Occasionally I would write about the past and the present. Never the future. But only occasionally.

But then Ruth asked me something. She asked me to write a letter to each of our children, saying how I felt about them, memories of our time together, an explanation of how MND had changed things. Something they would have, to keep when I died. It was the most difficult thing anyone had ever asked me to do.

I tried for years. But every time I started a letter I was immediately overcome by the act of saying goodbye for the last time, and I would get no more than a few lines in before my screen dissolved in the blur of my tears.

I didn’t want to write the letters and yet felt so guilty for failing to write them. I saved five empty documents, each named after a child, and they mocked me from my computer.

I was afraid of writing a book because I was scared of touching again the pain of the past six years and, going back further, the risk of new pain in revisiting the innocence of my life before MND.

But nothing frightened me more than those letters. So I started to write.

The book quickly became a comfort to me. Every morning I would write a little, always busy with my film, and it became a time of quiet, comforting reflection. I went back and it was okay. It was a journey.

I’ve written my book and the best part of it is how proud Ruth and my parents are. That’s it for me. It feels like a gift from me to them for all the years of love and suffering.

It has helped us in talking and thinking about the past. And recently, when we were talking about how our home was getting tight for the seven of us and whether we would extend it, inadvertently we found ourselves talking of the future.

Carpe diem is not good if fuelled by fear. My book helped us. But, above all, it is a letter to each of my children.