In Boston, her favourite was Cardinal Richard Cushing, the son of Irish immigrants, who became archbiship 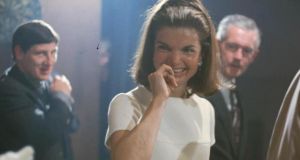 The revelation that Jacqueline Kennedy carried on a long, candid correspondence with an Irish priest is consistent with her preference for clerical confessors outside the confessional.

Her favourite priest from Boston, Cardinal Richard Cushing, was the son of Irish immigrants who became archbishop of Boston, all the while complaining he’d rather be nothing more than a curate.

Cushing became internationally known after presiding over Jack and Jackie’s wedding in 1953 and, 10 years later, the assassinated president’s funeral.

Like Fr Joseph Leonard, Cushing was more down to earth than pious, deeply spiritual but worldly. He was fond and protective of Jacqueline.

As someone raised outside Irish culture suddenly thrust into the most prominent Irish-American family, Jackie Kennedy found the Irish perplexing.

“These Irish, they always seem to have a sort of persecution thing about them, don’t they?” she said to historian Arthur M Schlesinger jnr.

Leonard and Cushing seemed to embody the best of the Irish, especially the ability not to take themselves too seriously, earning Jacqueline Kennedy’s admiration.

In an oral history he gave to Ted Kennedy, Cushing praised Jack and Jackie Kennedy as role models for young Americans and people everywhere. He said Jack Kennedy and Pope John XXIII were pioneers in confronting bigotry and led by example.

“Something of the same can be said of Jacqueline, that valiant woman, first described in the Old Testament,” Cushing said. “I meet young women today who were so impressed by her attitude at her husband’s funeral, by her dignity, her poise, her bravery, that many of these young girls now look up to her as an ideal.”

In 1968 Cushing was bitterly criticised by traditional Catholics and got hate mail after he defended Jacqueline’s decision to marry Greek tycoon Aristotle Onassis. The Vatican contradicted him, and Cushing offered to resign, but refused to back down in supporting Jackie.

Jacqueline was equally defensive of Cushing. Her animosity towards Martin Luther King Jr could be traced to her learning that FBI wiretaps captured the civil rights leader making fun of Cushing and suggesting Cushing was drunk at JFK’s funeral.

When asked if JFK was a practising Catholic, Cushing revealed the lack of self-righteousness that attracted admirers such as Jackie. “He was just as good a Catholic as I am,” Cushing said. “I don’t like to parade my religion. I try to live as I’m supposed to live. He was the same.”

Cushing presided over the private funeral Mass for Patrick Bouvier Kennedy, who lived for only three days. Jackie was too sick to attend, but Cushing gave her a special prayer he wrote for her dead son. She cherished it.