Strategy, solidarity and social are strong themes in the entertainment industry 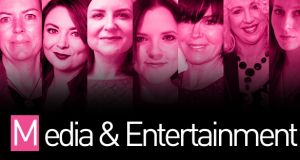 Morrison was appointed chair of the British Academy of Film and Television Arts (Bafta) in 2014 after working for more than 30 years with the BBC. During this time, she was responsible for some of the broadcaster’s most popular programming including The Secret Policeman and the relaunch of Top Gear.

An only child, Morrison grew up in Belfast and left to study English literature at Cambridge University. After finishing her studies, she won a trainee position with the BBC and embarked on a successful career in television. She started as a producer and director but went on to a career in management, becoming controller of documentaries and contemporary factual programming. In 2009, she was appointed director of the BBC Academy, the BBC’s training programme. Along with the well-known awards, Bafta runs a learning programme and Morrison says she hopes to “inspire” young people to progress in their careers.

Does a woman have to be more talented/work harder/be more ambitious than a man to succeed at the same job? “It often seems that way. I don’t think there’s much conscious discrimination but if the people with the power in an industry are predominantly middle class white men then they tend to feel most comfortable with other people like themselves and there is more of a perception of risk in hiring or commissioning someone outside that group. That means women frequently have to demonstrate more experience and skill to overcome that sense of risk.” What’s a good piece of advice you received? “I heard a talk by John Nicholson of Nicholson McBride who said the key to resilience is to ‘diversify the sources of your self-esteem’. I think that is rather brilliant. So many women in the early days of the media virtually had to marry the job, but it is much healthier to have a wide range of interests .”

The talent agent from Clare can lay claim to being one of the most powerful people in Hollywood, representing some of the biggest female names in film.

Queally moved to LA in 1989, after establishing a talent agency in Dublin. She began her US career at Triad Artists, which was acquired by William Morris Agency in 1992. She rose to senior vice-president of the motion picture department there, before moving to CAA in 2004. Her roster is serious stuff: Cate Blanchett, Kate Winslet, Michelle Williams, Marion Cotillard, Penelope Cruz, Daisy Ridley, Jessica Chastain, Lupita Nyong’o and more. Not one to forget her roots, she is a member of the Advisory Board of the US-Ireland Alliance.

Molloy, from Offaly, is the global chief marketing officer at Siegel+Gale, a leading strategic branding consultancy, and the company responsible for the iconic NBA logo and rebrand of Master Charge to MasterCard. An advocate for Irish business, she’s also a champion of Irish fashion, posting pictures on social media with the hashtag #WearIrish in the run up to St Patrick’s Day. With an MBA from Harvard Business School, she has been published in Harvard Business Review, Forbes, Fast Company, The Economist Lean-back, Huffington Post and elsewhere. She lives in Manhattan with her husband and their two sons.

“No woman can assume the absolute support of other women, a priori, based on gender alone. Female solidarity is most profoundly felt after women have had shared experiences together. I am close with a group of women from my Harvard Business School class. We spent two years together in a challenging environment and that period built a bond among us. We meet annually and celebrate triumphs and share woes. There is no judging. On a professional level, we make connections for business deals; we share job opportunities; and give each other honest career guidance. ”

To what extent is it becoming easier for women to succeed in her field? “I’m in global marketing, specifically, branding. Marketing has become more demanding as customers have taken centre stage in every enlightened company. The popularity of social media and the proliferation of competitors in every industry sector have contributed to the challenges facing brands. The critical success factors for marketers include problem-solving, creativity, analytics, storytelling, customer empathy, and teamwork. A professional of any gender with these qualities and a willingness to work very hard can be successful in marketing .”

Is there a a good piece of advice you were given along the way? “My father, a farmer, always hammered home the importance of building a reputation based on keeping your word. Years later, I now understand that this wisdom is the cornerstone of building great brands. Great brands are built on delivering on relevant promises.”

Barry is the head of social media and senior director of strategy at CNN. Previously, she worked at BBC World News as a journalist and social media producer.

With an Arts BA from UCC and a journalism MA from DCU, Barry started out as a researcher and journalist in RTÉ before moving to Newstalk in 2008. Her rise to such a senior position in a large organisation has been rapid, but she possesses a keen and intuitive understanding of how people interact with social media when it comes to current affairs, and how current affairs needs to interact with social media when it comes to people. A big traveller, she’s worked in a couple of dozen countries, and trained journalists in Iraq, Myanmar and beyond, and is currently based in New York.

Cutting her teeth in RTÉ as a multimedia journalist, Healy set up the broadcaster’s first dedicated social media team. Soon, she was poached by WorldIrish.com, a website dedicated to the Irish disapora across the globe, and became chief operating officer in October 2012, managing teams in Ireland, the UK and US.

In October 2014, she became UK editor of Mashable. com, a digital media site hailed by Time magazine as one of the 25 best blogs in the world. She is also working as a digital consultant for a handful of European media companies.

Originally from Ballybrack in Dublin, she graduated from UCD with a music degree before moving to the US to attend Northwestern University’s Medill School of Journalism.

“It definitely exists! There have been times when I’ve thought that women could do more to help other women, but generally I’ve been fortunate to be surrounded by strong women, from family and friends to colleagues and bosses – I’ve always felt a strong sense of solidarity.

“At Mashable, I’m surrounded by talented women I know I can rely on for support and guidance.”

What’s a good pathway into her sector? “Using Mashable as an example, we’ve got people who have taken all sorts of journeys. Our CEO Pete Cashmore founded the company as a teenager in Scotland, growing it from a blog to a global media company with 45 million monthly users.”

“Prepare yourself to work in an agile way and learn to love change.

“Things never stay the same way for long in this industry; to keep enjoying what you’re doing; try to embrace the shifting landscape, rather than fear it.” – Tanya Sweeney

Fox is a senior technology executive at the Walt Disney Company. She holds positions across various departments in an iconic company she’s been with for eight years, working on online marketing techniques and with a focus on data strategy.

What’s a good piece of advice you received along the way? “My early training at Dow Jones made a lasting impression, in particular we were taught the power of listening and empathy. The advice was to ask the customer questions, listen carefully to the response, ask for the order, and when the customer says yes, stop talking. The other piece of great advice I received is to not respond before you’ve had time to think.”

A native of Dublin, Connaughton-Deeny spent the early years of her career producing TV commercials. Moving to Sydney to do a master’s degree led to an opportunity to join Viacom, the media conglomerate that operates MTV, Nickelodeon and Comedy Central channels around the world.

Initially a junior finance analyst, she joined the small team setting up new channels in Australia and New Zealand. She then took on responsibility for the finance function of the European merchandise and TV syndication businesses.

Relocating to the Viacom headquarters in New York, Connaughton-Deeny’s role expanded to cover international markets before she eventually reached the level of vice-president and chief financial officer.

Now based in London but travelling the globe constantly, she also assumes direct commercial responsibility for Nickelodeon merchandising in selected European markets.

“I would say women need to work smarter and push harder than men. Simply working hard doesn’t assure advancement and women often lack the confidence to highlight their talents or express their ambition as much as their male peers.”

Does female solidarity exist, and if so, how has it helped her? “In my career, I have mostly worked for female bosses and they have all been very supportive and even ambitious on my behalf and in turn I’ve always tried to hire, mentor and promote women where possible. Women in the workplace don’t need to agree on everything or even work the same way to show solidarity; it often comes down to asking other women for their opinion and suggesting them for opportunities.”

To what extent is it becoming easier for women to succeed in her field? “Pop culture definitely influences the TV industry so the current fashion for feminism and critiquing gender stereotypes has made it easier to openly challenge executives’ assumptions and make sure that talented women can progress. I’ve also seen the conversation started by Sheryl Sandberg with Lean In help young women to ask for more money earlier in their career to make sure they are fairly valued.”