Irish Women in the World: Joan Freeman and four other active advocates

Showing solidarity with and speaking up for people who are suffering 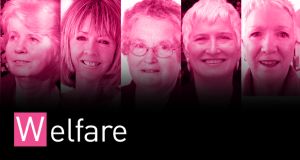 When police in Perth contacted the local Irish club after finding a dead homeless man with an Irish passport in his pocket almost 20 years ago, a group of concerned Irish people, including Joan Ross, who had only recently arrived from Co Armagh, decided something had to be done to support Irish people in crisis in the Western Australian city.

Since then, the Claddagh Association has helped to repatriate the bodies of dozens of Irish people back to Ireland, including five who died in separate incidents in Western Australia last December alone.

Ross, who works full time as a grants manager with the Commonwealth Department of Health, spends her evenings and weekends with her team of volunteers on the phone to distressed family members, visiting people in hospital or prison, assisting new arrivals from Ireland, organising events for the elderly, and providing support to any member of the Irish community in need.

In 2003, psychologist Joan Freeman closed her private counselling practice to research suicide and self harm. Aiming to “create a space that would help bring people through a time of crisis, an environment that would be non-clinical, compassionate and respectful”, Pieta House opened in Dublin three years later. The organisation now employs 180 therapists in nine centres across Ireland, helping 5,000 people suffering from suicidal ideation or engaging in self-harm in 2015 alone.

Last autumn, Freeman opened the first Pieta House abroad, in New York, to provide support for vulnerable members of the Irish community in the city.

“When the Irish leave, they have their own issues that they bring with them,” she says. “Their issues are compounded with isolation, with loneliness, the fact that they may not be able to get work, that they are looking over their shoulder all the time because they are illegal or undocumented. Pieta House has pledged to follow the Irish wherever they are.”

The Darkness Into Light fundraising walk now takes place all over the world each May. This year there will be one on the Golden Gate Bridge in San Francisco. “For the first time, we will be turning this bridge of tragedy where thousands of people travel to take their lives, into a bridge of hope,” she says.

Being a female social entrepreneur has its advantages and drawbacks, she believes. “I think we have to accept and embrace that women have an innate radar that can look out for and care for people in trouble. No matter how successful women are in business, we shouldn’t forget that talent we have.”

Profoundly moved by Mary Raftery’s documentary States of Fear, which broadcast in 1999 and exposed widespread institutional abuse in Ireland, Sally Mulready founded the Irish Women Survivors Network in London in 2002 to provide support to women who had spent time in mother and baby homes in Ireland.

Since then, she has led the fight for compensation and recognition for the 30,000 women who were held in the church-run Magdalen laundries.

As director of the Irish Elderly Advice Network, Mulready has fought tirelessly to support vulnerable older Irish people in Britain since the charity’s foundation in 1993.

She has successfully campaigned for the right of elderly Irish emigrants to an Irish contributory pension, based on their national insurance contributions made before they left Ireland. She has also been a Labour Party councillor for Hackney since 1997.

In 2012, Mulready was appointed by President Michael D Higgins to the Council of State, becoming the only member living outside Ireland.

Her achievements were further rewarded by the president later that year, when he granted her a Presidential Distinguished Service Award for the Irish Abroad.

“On International Women’s Day, I close my eyes and see the images of thousands of women refugees, and I wish I could do more than show solidarity with their dreadful suffering. They carry the bags, they carry the children, and they are the first ones to go hungry and it is terrible. It breaks my heart.”

When Uganda got its first Aids testing machine in 1988, Sr Miriam Duggan, a Franciscan missionary from Co Limerick, was working as head of obstetrics in a hospital in Kampala.

It was thought the disease was “out there in America” and hadn’t infiltrated into Africa, but test results quickly showed there was already a prevalence rate of 13 per cent in the city. As this rose rapidly to more than one in four people by 1991, Sr Miriam helped to establish mobile clinics to care for those infected, and the children orphaned by the disease.

Her Youth Alive programme, which has since spread to 21 countries across Africa, provided education around sex, drugs and “responsible choices” in an effort to combat the spread of the disease.

Her pioneering approach to behaviour-based HIV prevention earned her an honour from Harvard University, the Church of Uganda, and the Templeton Foundation in 2006, and in 2015 she was presented with a Presidential Distinguished Service Award for the Irish Abroad for her charitable work.

She now lives in Nairobi in Kenya, working with impoverished children and young people, and women living with HIV.

An Irish solution to the coronavirus problem
10