As attitudes change, some transgender students aren’t afraid to put their true identities on display when the debs comes around

17-year-old Lucas Cross came out to his school principal as trans a few weeks ago and put his new name on the school register. Here, Lucas and his mother Catherine talk about coming out, changing names and suiting up for the debs. Video: Kathleen Harris 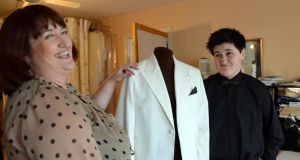 Lucas Cross preparing for his upcoming debs, with his mother Catherine, at home in Kildare. Photograph: Eric Luke

Debs season is upon us once again and, while images of stretch Hummers, ball gowns and black-tied boozehounds abound, there also remains a quiet sort of symbolism around the event.

“It’s about transitioning into the next stage of your life,” says Catherine Cross, a seamstress from Rathangan, Co Kildare. Catherine has just finished making her son’s suit for his debs. “You are moving from your school years into young adulthood, and it was important to us that Lucas experience that,” she says.

Her eldest son, Matthew, has been to three debs balls so far. But for Catherine, Lucas’s night, which will be held next week, is even more symbolic.

A female-to-male trans, Lucas will attend the night as his true gender. Earlier this year he changed his name by deed poll from the female name he was given at birth to Lucas, the name he chose when he came out as trans.

It was important for Lucas’s parents that his school recognise him as trans by the time his debs came about. “They call you up after the dinner and give you a scroll with your name on it,” says Catherine, sitting with Lucas in a busy cafe in Dublin city centre. “We didn’t want him called by his female name and then have to walk across the floor in a suit. We want him to have as normal an evening as anybody else.”

Lucas came out to his principal as trans a few weeks ago, at the beginning of sixth year, and put his new name on the school register. “But I came out to my parents three years ago,” he says. “I had to do it twice. First as gay, then as trans.”

His coming-out to his parents followed his discovery of a YouTube channel cataloguing the life of one trans man.

“It scared the living daylights out of me,” says Lucas, remembering how overwhelmed he was on hearing, for the first time, about a life experience that resonated so closely with his own. “I was so scared I didn’t want to touch my computer for two weeks. But then the truth of who I really was clicked into place, and I had to go and tell my ma that I wasn’t gay, I was trans.”

“I had a hard time with it initially,” Catherine says. “A very hard time. You’re losing a daughter and mourning that daughter. But you haven’t lost a child.”

Lucas felt he had to come out to everyone straight away, but his mother urged him to be more cautious. “I told him, ‘If your mother has a hard time with it, others are going to have a hard time’.”

So he waited a year before he began telling fellow students and friends.

“With transitioning, you need a lot of patience,” he says. “And it’s hard. I eventually had to tell my year head during transition year, when we had gender-basic modules – girls one week, boys the next – and I was sitting in with all the girls. It was horrible.”

Both Catherine and Lucas are keen to stress that his school, Ardscoil Rath Iomgháin, and the principal, have been supportive of Lucas, a Leaving Cert student. “They’ve been brilliant,” says Catherine. “We grossly underestimated people of all generations. I thought we might have to move, but they have been really accommodating.”

Not all young trans people are as fortunate when it comes to attending their debs. “Often they wouldn’t have had the chance to go to the debs in their preferred gender, so they skip it altogether,” says Broden Giambrone, director of Trans Equality Network Ireland. “Or it can be a traumatic experience if they are going as a gender they don’t identify with.”

It’s not an issue the network has fielded many calls on. But it’s increasingly becoming one, as younger people come out and try to negotiate the education system and all the social and cultural issues around it.

“Increased visibility means people realise that going to their debs is a possibility,” Giambrone says. “What is changing is that, instead of parents hiding the fact the child is trans or telling them, ‘You are going through a phase’, they are starting the process of trying to understand. They are listening to and supporting their child, helping them become the person they are trying to be.

“But there are still parents who aren’t fighting their kids’ corner. And since there are no guidelines from the Department of Education, all we have are ad-hoc arrangements in schools, if you’re lucky.”

Ben Power, from Cork, wasn’t living as a trans man at the time of his debs in 1999. Still, preparing for the event was a traumatic experience.

“I wasn’t entirely comfortable being girly, so yeah, the debs were great fun,” he says, his voice loaded with sarcasm.“My mother and two of her friends took me shopping, and I was in tears.

“I had put on a bit of weight, and they kept bringing me these dresses that were too small for me and which looked as if a sewing machine had thrown up all over the place.

“I would have loved to have gone in a tux, but I never even tried to suggest it. It just wasn’t something that girls did.”

Sam Blanckensee, a trans friend of Lucas’s, attended his debs at Loreto Secondary School, Bray, in his true gender two years ago. “It was really important to me to look good, as I was in a year where everyone else was worried about what dresses they were wearing.”

A white, backless Marcella waistcoat, a tie-it-yourself dickie bow and shoe lifts ordered from a special trans website, to ensure he was as tall as his date, were Sam’s “armour”. He had a haircut in the morning and a shave in the afternoon, to make his face look more masculine.

“My mum didn’t want me to be the only one in my year without flowers,” he says. “My date had the corsage, so she put a flower in my buttonhole.”

Sam came out on Facebook just before he sat his Leaving Cert, simply by changing the details of his profile. There was little reaction due to the looming exams, so the transitional nature of the debs was doubly felt by him.

“It was the first time my old peers called me Sam, which was so significant,” he says. “The next day I was starting college as a veterinary nurse, and my new course mates also called me Sam. In the space of 24 hours, both my old and my new peers accepted me as a man.”

Lucas’s suit, made by his mother, was inspired by a photo of a white tux worn by James Bond. She had made a similar suit for his father years ago.

“You want something special for the debs,” Catherine says. “It’s your first time being able to dress up nice for yourself . . . Lucas doesn’t like hiding, so this is going to be quite dramatic.”

Next week, Lucas will don the white suit and join his date – a female friend – and their peers at the debs. Will he be asking his brother Matthew, a three-time debs veteran, for advice?

Lucas laughs. “He manages to screw it up every time, so I’ll probably screw up too. It’s in the genes. But I’m still quite excited about it.”