How to make a revolutionary quilt 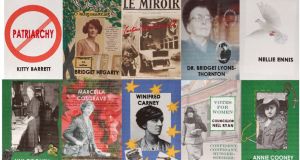 Women have a lot of conversations, but they rarely get to have a conversation that spans 100 years. But that is the length of the conversation 77 women in today’s Ireland have had with 77 women who fought in the Easter Rising. There was a lot to talk about.

Seventy-seven female activists of 2016 gathered to examine the lives of 77 women activists who were arrested and held in Richmond Barracks after the Rising over the night of May 8th, 1916.

When the women of 2016 had finished talking to relatives of the 1916 women and mined the military and pension archives, each designed a panel for the Rising woman she had been paired with. The panels were sewn together to form a quilt, which will hang in the new exhibition centre at Richmond Barracks. It is a colourful tribute to women’s hopes and aspirations, which the makers hope will inspire others to finish the job that previous generations of women started.

“These women were trailblazers,” says Marja Almqvist, who runs the Yarn School in Goldenbridge and co-ordinated the project. “They fought in the Rising, but they also fought for workers’ rights. Many were socialists as well as republicans. Also, many of them . . . fought for women’s rights. We owe them a tremendous debt.”

Little to go on

Some of the 77 women slipped through the net of history. How did the quilt-makers find out about those women of whom little information remained?

“The woman who got Bridie Kenny was Cathleen O’Neill, who has been a community activist in Dublin for more than 30 years,” says Almquist. O’Neill was “very upset” because she only had 21 words of information about Bridie.

On the same day last November, Waking the Feminists convened at the Abbey Theatre and O’Neill was there. The decision to place a hashtag on a quilt celebrating the action of women in Dublin in 1916 came out of that. Somehow it seemed appropriate. A tie that bound.

A book commemorating the 77 women – Richmond Barracks 1916, We Were There: 77 Women of the Easter Rising – by Mary McAuliffe and Liz Gillis will be published on March 8th, International Women’s Day. The quilt was informed and aided by the book, but it “isn’t historic”, says Almqvist. “It is a response to history.”

Relatives of the 77 women held at Richmond Barracks became involved, piecing together tales of lives long lost. Órla McKeown would weave together the story of her grandmother Anne Cooney, and great-aunts Eileen and Lily Cooney, before contributing shamrocks she crocheted to each of the Cooneys’ quilt panels. “Aunt Eileen was so patriotic. She would say, ‘Green is my colour for my country’, and there is her quilt panel in green.”

McKeown’s grandmother died before she was born, but she knew her great-aunts. The quilt gave her the chance to get to know them all better. “The Cooneys were told to mobilise at Weavers’ Hall in Donore Avenue. I think they did some céilidh dancing while they were . . . to pass the time till they knew exactly where to go. They then marched out to Cork Street, where they fell in behind the men from A Company. They ended up in the garrison in Marrowbone Lane and spent time cooking, cleaning and looking after the men.”

Con Colbert went out to the Rising from Anne Cooney’s mother’s house on Basin Street Upper, says McKeown. She shows a photograph of Anne wearing a military uniform, which the seamstress made from a uniform Colbert gave her. It is appropriate, then, that Anne Cooney’s quilt panel is edged by a row of perfect stitches.

Generations of relations gathered to make sure their female forebears are remembered for the part they played in the Rising. Bridget Hegarty was Josie Hegarty’s husband’s aunt, Lorraine Muddiman’s great-aunt and Sinéad Hegarty’s great-great-aunt. Five generations of Hegartys have been proud to live in Rialto, just as Bridget did.

The Hegartys had little information: “We spoke to my dad’s sister. She is 89 now and had no idea Bridget was in Cumann na mBan. So we knew very little about Bridget, although we knew she was in the garrison in Marrowbone Lane. Obviously she was doing what the other women were doing, like the cooking and cleaning, but unlike the Cooneys we have no idea of what went on there.”

Many of the women involved in the Rising rarely talked about it afterwards. Bridget did not talk about being in Cumann na mBan at all, her family say. But Military Pension records show Bridget was in Cumann na mBan for four years. Bridget Hegarty fought for her rights her whole life, writing letters to secure the military pension to which she felt entitled.

The quilt-makers and relatives of the women depicted hope that the quilt will inspire others. Young quilt-maker Nessa Finnegan has no doubt.“The 77 women of 1916 are really good examples to women now about activating your community, your family and friends: 1916 is inspiring people. I don’t think we have everything yet, but this project shows that we should be listened to. Women should be heard.”

“And we’re just as brave as men,” says McKeown.