Dingle Belles: The Women’s Podcast special from Other Voices

Hosted by Kathy Sheridan, this week’s podcast has great conversations, some Christmas magic and lots of music 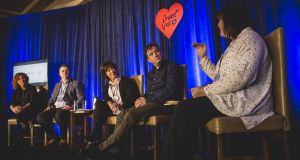 Kathy Sheridan chairing a session at the Ireland’s Edge panel at Other Voices. Photograph: Tara Thomas

“I don’t care how many Facebook hits or Twitter followers you’ve got. It doesn’t matter to me. If I don’t like the song, it doesn’t happen,” Other Voices music producer Aoife Woodlock told presenter Kathy Sheridan in the latest episode of The Women’s Podcast.

“That’s why we have all these unknown bands. Somebody said, ‘Why don’t you have Katy Perry?’, and I said, ‘We’re more interested in K.D. Lang.’”

‘Dingle Belles’, a special episode of The Women’s Podcast, was recorded live at the annual music festival that started in the Co Kerry town. Most performances take place in the 200-year-old Church of St James.

Woodlock reminisced about Amy Winehouse, whose 2006 performance at the event was named by the London Times as one of the top 25 greatest gigs of all time and is featured in the BBC documentary Amy Winehouse - The Day She Came to Dingle.

Speaking to Sheridan in the “Amy Winehouse Suite” of Benners Hotel, Woodlock said: “She sat on the brass Fungi, put her arms out and said, ‘I feel as free as a bird.’

“The world has lost a very unique and special artist, and I don’t know when we’re going to see that level of pure talent again. Jazz was in her genes.”

The mother/daughter-themed episode features a conversation between Sheridan and her daughter, MayKay Geraghty, front woman of Fight Like Apes

The women talked about being creative under pressure. Geraghty said a “turning point” in her song writing came after advice from her Irish Times columnist mother to “just write something down”.

“Mum has been meeting the most impossible deadlines for most of her life . . . She said, ‘You don’t always have a chance for something to come to you, Mary.’”

Also on the podcast, Nuala O’Connor and her daughter Molly King talked about their family’s involvement in the music festival. Emmy-winning producer O’Connor is the wife of Other Voices founder Philip King. Her daughter has worked at the festival since she was a child.

The last mother-daughter pair, 83-year-old painter Liz Knutt and her daughter Di Donaldson, told the story of how the family came to live in Dingle decades ago.

Live music is also on the podcast, with performances from singer-songwriters Ailbhe Reddy and Hannah McPhillimy, as well as former Rose of Tralee Dr Aoibhinn Ní Shúilleabháin.

The Women’s Podcast will review the year in an upcoming episode, so we want to know what you thought of 2015. Our question of the week is: How was this year for you and for women generally?