The rollout of the scheme in Cork has been dogged by delays, resistance and complaints about cycle lanes. And don’t mention the plinth on Washington Street

The Cork bike scheme was introduced last December but it has left disgruntled taxi drivers and Councillors in its wake. 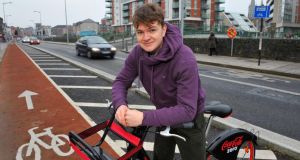 Last July Alan Kelly, then minister of state for public transport, unveiled a new bike-share system for Cork, Galway and Limerick. Coming five years after the start of Dublin Bikes, cycling was finally to be rolled out beyond the capital.

Given the success of the scheme in the capital, you could be forgiven for thinking its extension would be broadly welcomed, especially Leeside. Not so, however, for things are astir down south. Motorists lament lost lanes, and taxi unions and the Garda grumble about rank relocation.

Businesses worry about the “doughnut effect”; building sites stand where bike stations should be, and many of the new bike lanes are strangely empty.

Hemmed in by river and marsh, hill and harbour, and comprising mostly narrow, medieval streets, Cork’s transport has, until now, largely relied on a one-way road system. And not everyone likes the change.

“It’s been a disaster,” says Cllr Terry Shannon of Fianna Fáil. “With our narrow streets and topography, we’re trying to turn Cork into a European city, like Amsterdam or Paris. They have wide boulevards. We’re taking out massive parking space, putting in lanes and hoping the cyclists will follow.

“We’re not spending money on essentials,” he says, citing cuts in road maintenance. “We spent over €650,000 on a bicycle lane in Washington Street and we have a concrete plinth down the middle of the street.”

Ah, the plinth. Never before has so much ink been spilt and so much talk radio occupied over so little concrete. Installed to protect cyclists on a new contraflow cycle lane from University College Cork to the city centre, the Washington Street plinth has been blamed for everything from traffic congestion to shattered suspensions.

To compound matters, the redesign also involved moving a taxi rank from outside a busy night club to a side street. Garda divisional headquarters on Anglesea Street advised the city council against the move on public safety grounds. Taxi drivers feel squeezed out.

“They halved the number of lanes in the main street of the city,” says Bobby Lynch of Cork Taxi Council. “We have nothing against push-bikes, but this cycle lane network is the fastest bit of work we ever saw the city council do.”

He cites the continued delays in repairing the quay wall at Grenville Place, which was obliterated by the floods of 2009 and 2012, as more pressing work.

There are also fears that the reduction in road and parking space might hamper the city centre’s economic revival. Requests for an interview for this story with the new City Council chief executive, Ann Doherty, were turned down.

“I’ve questions about some of the bike lanes,” says Billy Kelleher, a Cork TD and Fianna Fáil’s health spokesman. “They seem to be taking up a large proportion of road space, which is causing big problems. We don’t want any bar to the commercial life of the city.”

Last year, after extremely divisive debates, a majority of city councillors called for a halt in construction of National Transport Authority-funded cycle lanes near Kent Station, following lobbying from business. Not all are against. Twelve councillors supported the lanes, including Cllr John Kelleher, whose brother was killed in a cycling accident.

Hugh Creegan, deputy chief executive of the National Roads Authority, repudiates the notion that the authority’s €10 million investment in sustainable transport in the greater Cork area is unnecessary.

“Cycling in Dublin doubled over the last four years or so, due in no small part to the provision of cycling facilities,” he says. “The same, we believe, will happen in Cork. Cycling is showing the biggest increase in all transport modes.

“As the population of metropolitan Cork rises, there is a need to move more people by public transport and bike. Car traffic has to be catered for, but pedestrians and cyclists are vulnerable road users, and it is important that we have safe facilities. The test we apply is, would you put your children, aged 12 or 13, on a street to cycle?

“Most of our investment in Cork is with an eye to increasing the number of people coming in and out of the city centre, which will be good for retail activity in the long run.

“Are people saying we just keep catering for car traffic, and ignore the cyclists? You can’t build a whole lot of new roads into Cork, any more than you could do it in Limerick or Galway.”

Some of the criticism has been bewildering. Owen O’Callaghan, the developer behind Mahon Point and Liffey Valley shopping centres, recently cautioned that cycle lanes, parking costs and suburban shopping centres were drawing business away from the city core.

While resistance in the city is likely to continue, others in the county are embracing it with open arms: a similar scheme is already being planned in Clonakilty in west Cork.

Back in the city, some 17 of the 31 promised bike stations are yet to open, despite an initial launch day of December 18th, 2014. The National Transport Authority blames the delay on a moratorium on city roadworks, introduced over Christmas, and says it will be finished by the end of February.

Some 2,000 cyclists have signed up to the bike-share scheme in Cork, and about 1,500 in each of Galway and Limerick. While just 3 per cent reported commuting by bike in the last census, the growth in cyclists since is palpable.

“They haven’t gone far enough in rolling out the bike lanes, if you ask me,” says Ian O’Neill (30), a scientist who commutes by bike from Turner’s Cross.“Washington Street is controversial, but since they’ve put in the bike lane, there’s less and less traffic there because people are finding alternative routes. At the start, it was mayhem. People are just being put out by change. All roads are for cars, but now a small percentage are being shared with bikes.”

Last year Ian and his fiancee, Karen, sold their car and now they rely on bikes and GoCar, a car-sharing initiative.

I decide to try out the new Cork bikes, starting my trip at the western-most station: Gaol Cross, outside UCC.

Cycling in-bound on the contraflow lane, from Lancaster Quay on to Washington Street, I almost crash into an unruly fellow cyclist going the wrong way.

There is a noticeable lack of acrimony between cars and cyclists in Cork, which, after years of risking life and limb cycling through central Dublin, is incredible to me. Whether that’s the effect of the concrete plinths (good fences make good neighbours) or down to scale is hard to say.

Yet, pedalling leisurely down Lancaster Quay on a bright crisp afternoon, with the sun bouncing off the nearby River Lee Hotel, and seeing the oddly un-Irish ordered alignment of road, river, footpath and cycleway, it does feel oddly European.