Seat starts its latest offensive with a sporty new Ibiza 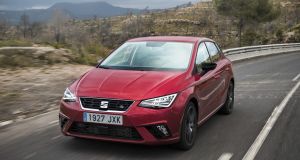 The new Seat Ibiza has already picked up design awards 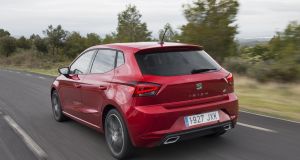 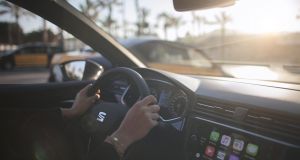 It’s time for Seat to step out of the shadow of its VW Group siblings. That seems to be the accepted message emerging from the Spanish brand as it prepares the latest product offensive in its history.

After years in the red, Seat has turned a profit – albeit a 2 per cent profit margin on turnover of over €8 billion – while it has something of a proven visionary in the hotseat, in the form of Luca de Meo. In return it is no longer getting last pick of the latest toys from the group’s research department.

First up, the new Seat Ibiza, a smartly styled supermini that will hit Irish roads in time for 172 registrations. Boasting a more spacious cabin than before, the Ibiza is the first of the VW Group to get the firm’s new small-car platform, the MQB-AO. It’s not a very catchy name but this is a reworking of the award-winning underpinnings of the current VW Golf and other models from across the group’s brands. The Ibiza also gets the latest 1.5-litre 150bhp petrol engine developed by the group.

First to that new chassis, and it’s a bit of a star. We got to test it on some tight and twisting back roads in the hills around the brand’s hometown of Barcelona, and it proved both agile and eager. Admittedly it loses some of its lustre when paired with the less potent 1-litre 115bhp engine rather than the new 1.5-litre, but it’s admirably sophisticated for its class.

The new Ibiza will come with several engine choices: the 1-litre three-cylinder petrol with either 95bhp or 115bhp; the 1.5-litre 150bhp petrol; or a 1.6-litre diesel in 80bhp, 95bhp or 115bhp. With diesel power increasingly the subject of environmentalist ire – thanks in part to Seat and its parents antics with cheat devices – it’s likely most Ibiza buyers will opt for one of the petrol variants. If so, then those who like a little bit of hot hatch flavour in their motoring diet should consider the 1.5-litre. Seat expect it to make up about 5 per cent of overall Irish sales, but it could potentially deliver more.

In terms of interior space the car offers decent legroom in the front – certainly enough for a six-foot adult – and the back seats will take two sizeable adults without effort. The styling is in line with the family look, although it could have benefited from being a little more radical to stand out in a very crowded market. That said, it has picked up a Red Dot award for design since its launch, so there are some sharp-suited stylists in polonecks who appreciate the look.

Pricing has yet to be confirmed, but we reckon it may start in the realm of €15,000. Four grades are on offer, but in reality its entry-level S grade and SE, then a choice between the comfort-orientated Xcellence or the sportier FR. The step up between the grades is likely to be be priced in the region of €1,400. Where the FR gets 17-inch alloys and sports seats, the SE gets more comfortable 15-inch alloys and cruise control. Like rivals, Seat has ditched the three-door format, so the Ibiza is only offered as a five-door hatchback.

In terms of connectivity – the industry buzzword of 2017 – the Ibiza offers a touchscreen centre console with Apple CarPlay or Android Auto. It also features a wireless charger in the dash.

The Spanish brand has a lot of work to do to get itself back on car buyers’s shopping lists, but the Ibiza is certainly a massive step in the right direction. It looks good, boasts an impressive range of engines but the best feature is undoubtedly the group’s latest take on its MQB platform. It has got the parts recipe just right for what you look for in a supermini: light and nimble handling with sporty performance.

The Ibiza is a very important car for Seat, particularly in the Mediterranean markets, but there is much more to come. The crossover SUV market is critical in countries north of the Pyrenees, and that’s where the new Ateca and the smaller Arona (the latter due in autumn 2017) will really start to reinvent the brand.