Mercedes backs down over US ad for ‘self-driving’ car 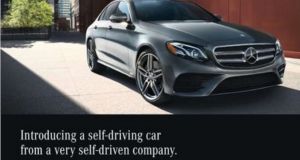 Self-drive? Mercedes attempted to clarify the situation, saying there was on-screen text in the advert reminding viewers that the car can’t drive itself completely

Mercedes-Benz has been forced to withdraw an advert in the United States which made too grand a claim for the new E-Class’s self-driving abilities.

In the advert, a narrator is heard asking, “Is the world truly ready for a vehicle that can drive itself? Ready or not, the future is here”. The ad then goes on to show a driver taking his hands off the wheel for what appears to be an extended period of time.

The commercial attracted the ire of consumer and safety groups which argued that the E-Class as it stood did not meet the federally regulated description of a fully autonomous nor even that of a partially autonomous car.

A letter, sent to the Federal Trade Commission and signed by, among others, the influential review magazine Consumer Reports, said the advert showed the car being “marketed in a way that a reasonable consumer would believe it does [drive itself], which in turn could give people a false sense of security in the ability of the car to operate autonomously”.

Mercedes attempted to clarify the situation, pointing out that there was on-screen text in the advert reminding viewers that the car cannot drive itself completely and that the driver still needed to keep their hands on the wheel much of the time. However, the safety groups said such “fine print” was only allowed for minor clarifications, not for entirely reversing a message shown on screen.

“The systems used in the new E-Class are clearly identified as ‘driver assistance systems’, which we have spent the better part of two decades developing in pursuit of an accident-free future,” said Donna Boland, a spokeswoman for Mercedes.

“The Future, featuring the F015 concept car, is intended to draw the connection between that vision and the innovations that are in today’s Mercedes-Benz models.”

However, Mercedes later decided to withdraw the advert entirely, with Boland saying: “The new 2017 E-Class is a technological tour de force and is a significant step towards achieving our vision of an accident-free future.

“We do not want any potential confusion in the marketplace to detract from the giant step forward in vehicle safety the 2017 E-Class represents.”

However, none of this has stopped Mercedes from pushing forward with investments in electric cars and self-driving technology.

Head of Mercedes-Benz Cars Dieter Zetsche told Automotive News the company was becoming “more bullish” about the sales prospects for electric cars and that R&D spend would, in 2016, be significantly higher than the €6.6 billion Mercedes spent on new technology in 2015.

Mercedes is expected to use next month’s Paris motor show to display, at the very least, a concept (and possibly even a full production version) of a new electric saloon which will go on sale in 2020.

That car will be sized roughly between the E-Class and S-Class and will be a rival to Tesla’s Model S (a car which, ironically, uses some Mercedes components, notably for its switchgear). That car will be followed by a smaller model (sized between the C-Class and E-Class) and two SUVs, all based on a common electric architecture.

Mercedes is also pressing forward with an expansion into ride-sharing and car-sharing plans and has bought a 60 per cent controlling stake in the taxi-hailing app, Hailo.

Hailo is primarily known as a taxi-based system in Ireland, with about 10,000 drivers signed up and some 45,000 daily passenger journeys. Mercedes will merge Hailo with its existing MyTaxi service, and the conjoined companies will rebrand as MyTaxi.

Hailo gained plenty of kudos in the taxi industry thanks to its commitment to work with existing drivers and companies, rather than the more adversarial attitude taken by its rival, Uber.

However, a disastrous attempt to crack the New York market left it vulnerable to a takeover. A loss of £21 million in 2014 meant it had to drop plans to create a private hire-based competitor to Uber.

Those plans will likely be revived under MyTaxi, so it will be interesting to see if the arrangements with its current Hailo partners can be maintained.