Whatever your budget or motoring needs, we identify the best in class, a few rivals to consider and what to buy used 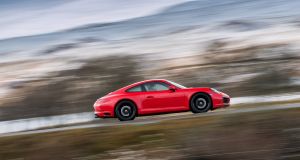 Some said that the switch to turbocharged engines across the 911 range (save for the most extreme GT and R models) would be the car’s ruination. Noise and throttle response would be dulled and the car’s very soul would be forfeit. Um, nope… What Porsche has done is quite remarkable in fact. It has replaced the old 3.4 and 3.8-litre flat-sixes with a new 3.0-litre turbo version in two states of trim - 370hp for the Carrera and 420hp for the Carrera S. And as long as you’ve specced your 911 with the optional sports exhaust, they are little short of magnificent. Turbo lag seems non-existent, and they still make that magical howl as they pass 4,000rpm. Better yet, acceleration, emissions and fuel economy are all improved and the chassis and steering are as sublime as ever they were. Still the practical supercar (compact shape, back seats) and still the one to which we should all aspire. 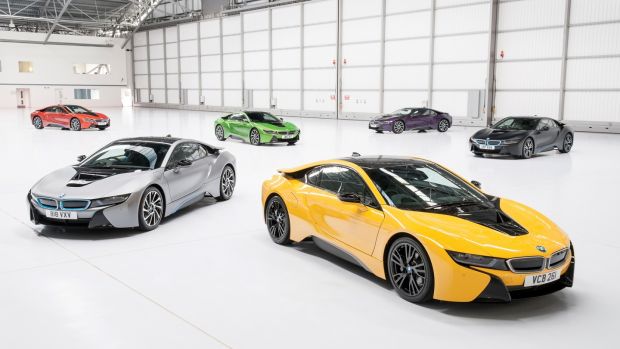 It’s not the quickest supercar around, but then fitting it with heavy batteries and the engine from a Mini Cooper has seen to that. It’s not the loudest either. In fact, much of the time it may pass by with a silent whirr. And it even has vestigial back seats… But the BMW i8 is a supercar alright, that is without question. Just look at the insane, McLaren-style doors for instance, and the hip-high roofline. And the outrageous styling which has an entirely magnetic power on all eyes in the vicinity. So it doesn’t have a shouty V12 engine? Good, because what it does have is a petrol-electric plugin hybrid drivetrain which can power it on just the batteries for up to 50km, and which give it an insanely low 49g/km Co2 figure. Yet when you press hard on the right hand pedal, the electric motors and the 230hp turbo three-pot engine chime in together and give it performance to match an M3 saloon. Which is surely sufficient. Not the fastest then, but the most forward looking supercar. 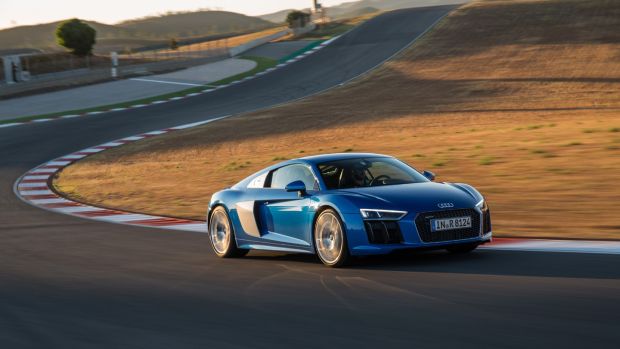 Yes, it has a rather grey, dour cabin which could almost have been lifted from a humble A4, or at least a basic TT. It lacks entirely the clever, environmental-saving functions of the BMW i8 and it doesn’t even have back seats. But what the R8 does have, in R8 V10 Plus form at any rate, is 610hp of sheer unbridled, volcanic fury nestling just behind the back of your neck. Without turbos, its Lamborghini-derived 5.2-litre V10 engine responds almost before you’ve pressed the pedal and it does so with a crackling, bellowing soundtrack that seems to defy the physics of hearing as much as the car seems to defy the physics of speed. It is just colossally fast, in all circumstances, but thankfully has the steering and the quattro all-wheel-drive to help you keep it between the ditches. And you can, if you like, dial it all back to the ‘Sane’ setting, and pootle to the shops as easily as if it were an A3 TDI. Which is both the magical thing about it, and also the reason why it, very slightly, lacks a bit of magic.

It’s an old design now, the Vantage, dating back as far as 2005. Its engine is technically even older, dating back to the late nineties and is actually two 1993 Ford Mondeo V6 engines on a common crank. Well, paternally speaking at any rate. Its instruments are hard to read and its infotainment system appears to be steam powered. And it has build quality that makes some old Skodas look like bank vaults. And yet the V12 Vantage is a truly magical car. Small, with a short wheelbase and that remarkable, amazing V12 6.0-litre engine snorting and growling away up front, it is fast, gloriously noisy and has and amazingly deft chassis and steering combination for a car approaching teenagerhood. They won’t be making them for much longer, and while a replacement is in the works, something tells us that it won’t be quite so wonderfully unhinged as this. Buy one while you can. You can even have it with a manual gearbox now…

The Bentley Continental has been with us, in its present form, since 2003 and it makes an astonishingly sensible used buy for a car of this type. Yes, it will cost a fortune to run, even in the best case scenario, but they are reliable, useable cars with useful interior space (albeit very small back seats) and the more recent V8 versions can even see what looks like decent fuel economy, somewhere off in the distance. The electrics are a weak point - complex and prone to suffering from water leaks. Any trim damage inside will be a fortune to fix, and they can get through a set of brake discs (discs, not pads) in as little as 16,000km. Servicing costs are also heart-wrenchingly expensive. Still, as supercars go (and it can top 330kmh…) it’s among the more sensible.

The Irish Times guide to the best cars for every budget.