Formula One races into crisis

But are current problems a front for financial shenanigans? 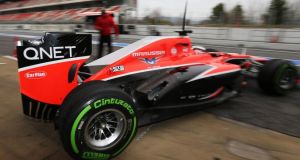 Both Marussia (pictured) and Caterham are in dire financial straits and other teams are not far behind.

Any potential shareholder would right now be on the phone, giving it the full eighties Michael-Douglas-in-Wall-Street performance – shouting sell, sell, sell down the phone. Formula One appears to be in crisis, with teams asking for notes from mother to allow them to skip the next race in Austin, Texas while the sport’s governing body is making ominous rumblings that it may have to invoke the three-car-per-team clause to fill up the grid for 2015.

Last week it was Caterham, this week it was Marussia. Both are part of the ‘new team’ intake back in 2010. Tempted by promises of a budget cap that would allow new, lightly-funded teams to compete on an even(ish) footing with the established boys, Hispania Racing Team (HRT), Virgin Racing (which evolved into Marussia F1) and, rather confusingly, One Malaysia Racing, which competed initially as Lotus before then becoming Caterham, all entered the sport only half-jokingly referred to as ‘the Piranha Club’ by Eddie Jordan.

Although there have been occasional flashes of performance and points-scoring, none of these three ‘new’ teams ever really troubled the scorers. HRT was the first to fall, at the end of the 2012 season. Chatham and Marussia keep going but a lack of sponsors has in the past fortnight seen the administrators take up residence in both teams, and both have been given permission by F1’s head honchos to skip the next two races, in the US and Brazil, while buyers are sought.

Buyers are, to be frank, unlikely to be found though as F1 is looking more and more like a busted flush, much of which can be played at the door of a certain Bernie Ecclestone.

Ecclestone, for a man who likes to dress in monochrome black and white, is something of a colourful character. With a past that encompasses second hand car dealing, driver management, team ownership and alleged links to the Great Train Robbery (“It wouldn’t have been enough money for me” he’s said to have joked…) Ecclestone took an iron-fisted control of F1 in the late seventies, and almost single-handedly turned it from minority interest to massive global event, making the team owners millionaires and himself a billionaire in the process.

Recently though, things have turned sour for both Ecclestone and F1. While Bernie has been in and out of the courts, successfully fighting off allegations of bribery and corruption, F1 has seen its audience plummet, both at the tracks and on the TV. This year’s German Grand Prix, for instance, was the most sparsely attended for decades, and this dispute a German team (Mercedes) and German drivers (Nico Rosberg, Sebastian Vettel) in the hunt for victory on home soil. Ecclestone has pursued a policy in recent years of pushing F1’s geographic boundaries, moving away from its traditional homes in Europe, the US and Japan and into the Middle and Far East, Russia, China and elsewhere. He says it’s appropriate for a global championship to visit as many countries as possible – most think it’s merely because government-backed race tracks in places like Bahrain, Abu Dhabi and Sochi are willing and able to pay the multimillion-dollar fees for hosting a race.

It’s Ecclestone’s other dealings that have really left the sport teetering on the brink though. Through a series of complicated deals in the late nineties and early 2000s, Ecclestone was granted an effectively endless 100-year lease on the rights to stage the F1 championship by former head of the FIA Max Mosely. For that Ecclestone paid the princely sum of $350-million. He then sold on those rights for billions more, with ownership ultimately ending up in the hands of investment bank CVC Capital Partners. CVC it is which now takes most of the profit from F1 every year, effectively paying Ecclestone as an employee, and leaving very little to be disbursed to the teams which put on the show. The effect has become all too tangible this year…

Aside from Caterham and Marussia actually entering administration, all but three of the top teams have had financial difficulties this year. Swiss-owned Sauber is in particular trouble, and is looking for an investor to prop up its finances. Force India, owned by Kingfisher Airways’ Vijay Mallaya, has blown most of its budget to keep hot-shoe driver Nico Huldenberg on board and even Williams F1, fresh from a major boost in performance and a new sponsorship deal with drinks giant Martini, has posted a STG£20-million loss this year. Even mighty McLaren have run without a title sponsor on the car for this season, and if a blue-chip team like that can’t get someone to sign on the line, then who can? Ferrari and Red Bull seem to be the only teams on the grid not financially troubled, but even Red Bull, with its apparently bottomless pockets, has made noises about selling of its ‘B’ team – Scuderia Torro Rosso, and one suspects that Red Bull’s tycoon owner, Austrian Dietrich Mateschitz, becomes unhappy with either team’s performances, he won’t be slow in pulling the plug. Ferrari and Mercedes at least have the backing of major car makers, but it only takes one disastrous board-room meeting for that backing to be withdrawn. Just ask anyone who worked for the Honda F1 team in 2008…

So is that it? Is F1 in terminal decline? Should we just bin it all and concentrate on Le Mans or Rallying? Well perhaps not, because there are some interesting movements in the background.

Last year, F1 planned to float itself on the Singapore Stock Exchange – a move that foundered upon the rocks of Ecclestone’s ‘interesting’ legal issues. Since the rules changed this year, dropping the old petrol V8 engines and introducing new, ‘greener’ 1.6-litre V6 hybrids, there has been vociferous criticism that the cars, and the racing, aren’t exciting enough any more. Much of that criticism has come from Ecclestone himself, and earlier this year it was rumoured that Bernie could be putting together a consortium to buy F1 back from CVC. Needless to say, failing teams, sporting turmoil and public apathy would all push the potential sale price for that move down…

A conspiracy theory too far perhaps? Possibly so, but for all or any of Ecclestone’s faults and foibles, he’s a racer to his core – as keen on raw horsepower as on making money. If anyone could pull the strings to make a grand theory like that come together, for his own benefit of course, it’s Bernie.