A dream come true for hunters of classic antique cars 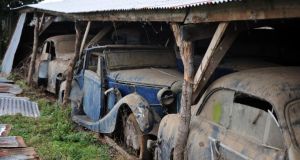 A collection of 60 antique cars, dating from the 1930s to the 1970s, are parked on in makeshift shelters at the Gaillard property in the western French town of Echire. Photograph: Xavier Leoty/AFP/Getty Images 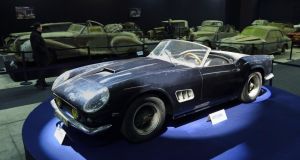 A collection of antique cars found in makeshift shelters at the Gaillard property in Echire, France, included a Ferrari 250 GT SWB California spider. 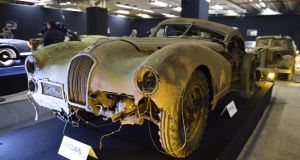 This Talbot-Lago T26 Grand Sport SWB Saoutchik was among the cars found at Gaillard property in Echire, France.

It is the dream of every car enthusiast: to have a remote and padlocked shed and its contents bequeathed to us by a formerly unknown distant relative or benefactor.

Cracking open the door, the lock and chain weighted down with rust and neglect, sunlight penetrates the interior for the first time in decades. The light falls upon weathered metal, tarnished chrome and cracked leather.

A barn-find, the discovery of an unheralded collection of hugely valuable classic cars left mouldering in some agricultural shed, can turn ownership of a rotting building from a painful chore to a lucrative windfall.

And it happens, it really does. The most recent and celebrated case is of the Roger Baillon collection. Experts from the Artcurial auction house in Paris were called to a location in rural France to assess the collected cars of a long-bankrupt haulier.

Baillon had a passion for cars and assembled some rare and wonderful machines, with the intention of retiring them and exhibiting them in a proper museum-like atmosphere. Alas, with the collapse of his company, his reach exceeded his grasp and the collection fell into disrepair in a motley gathering of tin sheds.

With the passing of time though, these cars became ever rarer and more valuable and when the assessors from Artcurial broke out their cameras and notepads, what they recorded was nothing short of sensational. A Maserati, for instance, that turned out to be one of only four built. Three incredibly rare Talbot-Lago T26s with coachwork by French bodywork company Saoutchik.

Speaking to the Daily Telegraph, Pierre Novikoff, Artcurial’s car specialist, said that “a collection like this can’t fail to arouse the passions of those who love automobiles, as well as art and history enthusiasts. Emotionally it is very strong. Some cars from the 1920s and 30s still have the original paint. Many of the most interesting cars are from the 1930s, 40s and 50s, most are coach-built by French firms”.

Then there was the real prize – a Ferrari 250 California SWB. Once you put the name of Ferrari next to the numbers 250, you can metaphorically start to print your own money. Ferrari 250 models in all their forms are invariably the most prized and valued cars in the world, and this one had some interesting history – having been owned by celebrated French actor Alain Delon.

When it was sold at auction at the recent Rétromobile classic car show, the Baillon collection amassed a total value of €25 million. The Ferrari made €16 million all by itself.

The odd thing is that while the world of classic cars is generally an obscure and specialised one, barn-finds seem to have been oddly popular and populist in recent years. It all began with the story of a shed in Portugal which was found to contain a literal and figurative wealth of old cars, some exceptionally rare. The wildfire mentality of the internet soon had it that the collection was lost and long forgotten, and only discovered when the rest of the property was sold for tax purposes.

Apparently though, this was purest baloney – the collection belonged to a car dealer and the photos that surfaced online were simply those he had taken to catalogue his assets.

Nevertheless, there are genuine finds to be had out there. A 1930s Mercedes convertible, a literal one-off made especially for racing driver Rudolf Caracciola, was found in the back of a Los Angeles junkyard. A young enthusiast bought on eBay what he thought were the reproduction body panels of a BMW M1 supercar, only to find that the panels were original, and belonged to a car that had actually raced at Le Mans.

There are even tales of shipping tycoon Aristotle Onassis buying a Lamborghini Miura, parking it in the underground parking garage of the Athens Hilton and never getting around to going back for it.

So, have barn finds really become more common? Given the ever-spiralling values of rare cars should we all be out there right now, peering into disused buildings in the hope of uncovering rare supercars?

James Elliot, group editor of Classic and Sports Car magazine, urged caution when he spoke to The Irish Times. “Rising values definitely have something to do with it, and while there are always people on the trail of lost classics, more often than not it is the barn-finds that come to the people and not the other way around. Certainly, the current high profile of classics in the mainstream media contributes a great deal in that people who are sitting on collections are a bit more forthcoming when there are stories about prices going crazy every day.

But surely, one would think, even when they were new, such cars as the Delon Ferrari, would have been valuable and coveted enough that someone would have kept an eye on them?

“I think you need to draw a distinction between genuinely ‘lost’ –which can happen – and ‘out of the public eye’, which was more the case with the Delon Ferrari,” says Elliot. “Plenty of people in the trade knew exactly where it was and had been trying to get their hands on it for years.

“The biggest factor in how far a car goes off the radar depends on how long ago it disappeared. The longer ago – when there was less of a classic car movement, a California didn’t have the value of a Park Lane mansion and something like Alain Delon’s ownership would have been an interesting factor but probably have no effect whatsoever on values, plus when there was no internet keeping track of everything ever – the greater the chance it will be forgotten. It is very difficult for anything to go missing nowadays, but a couple of generations ago it was different.

“There are still plenty of amazing cars unaccounted for, especially pre-war cars and racing cars, and you never know what is going to come to light. In particular cars that were caught up in the second World War, many of which were hidden or moved or broken up during the hostilities, and some of which still haven’t re-emerged.”

I’ve long given up trying to be cool and aloof. Now I’m an expert at small talk
10