Felicity Hayes-McCoy on living in Bermondsey and Ballyferriter 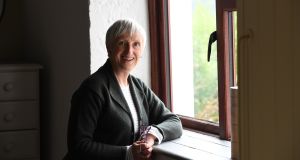 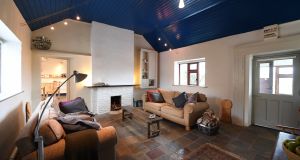 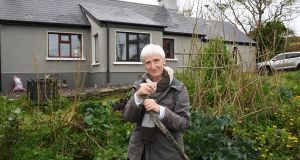 Felicity Hayes-McCoy in the garden of her cottage in Kerry

For Irish people the nuances of Brexit are complicated, not just in terms of the economy or the effect it may have on the Border, but in the sense of a shared cultural landscape suddenly under threat. My English husband Wilf and I live our lives in two places: a one-bedroom flat in inner city London and a two-room stone house in the West Kerry Gaeltacht. Effectively they’re live-work spaces designed as a single unit and linked by cyberspace, which is how, after nearly 30 years, we’ve achieved a lifelong dream.

I went to London in the 1970s when flights still cost a fortune and wheeled suitcases hadn’t yet made it to Ireland. Like many an emigrant of my generation, I had a vague feeling that I’d be home shortly, though it wasn’t Dublin, where I’d been raised, that pulled me back. It was Corca Dhuibhne – to be specific the last eight miles of the Dingle Peninsula - a place I’d fallen in love with at the age of 17.

In London I built a freelance career, as an actress and then a writer, and to begin with I lived in shared flats and rented rooms. Then, when Wilf and I married, we bought our first home, a terraced maisonette in Twickenham with a worrying crack in the back wall caused by Luftwaffe pilots bombing the railway line to Waterloo. It was there, with practically no money and a narrow set of dolls-house rooms to work on, that Wilf and I developed a lifelong love of building and design. Fortunately for our marriage, he too fell for the West Kerry Gaeltacht, which we first visited together in a hire car on our honeymoon.

Wilf is a theatre director and writer who, having begun in stage and production management, had the practical and organisational skills that allowed us to restore the maisonette. After a few years we sold it and took on the scarier task of renovating an Edwardian terraced house. That too had interesting war damage; it also had extensive wet and dry rot that manifested itself in truly hideous fruiting bodies behind the crumbling plaster. After a year or so spent dodging home from rehearsals and script meetings to clamber into dirty overalls, we finished the job on scaffolding, removing layers of paint from the deteriorating redbrick façade using nail guns. I’m not sure that my own nails have ever recovered.

All the time we kept making beelines for West Kerry, treating it like a kind of battery-charger when work got overwhelming. But our professional lives are London-based and, besides, I’d come to love my adopted city. You can’t beat it for cosmopolitan style and creative energy or the way Renzo Piano’s soaring Shard glitters at one side of London Bridge opposite the dark medieval bulk of St Magnus the Martyr.

So for 20 years Ireland was a place we went on holiday, and Dublin, which has changed in so many ways since I grew up there, felt less and less like home. But Corca Dhuibhne never changed for me. The physical beauty of the end of the peninsula, its language and cultural heritage, the multi-skilled non-linear approach to life, and its powerful sense of community, remained enchanting. Occasionally, Wilf and I would ask ourselves if there was any way that we could spend more time there. But the answer was always no. It was something we could only dream of. Until the internet changed our world.

These days we can work wherever there’s a broadband connection. I’ve finished chapters of novels and composed emails on Ryanair flights from Stansted to Kerry and sent them off to my editor or my agent as soon as the plane touched down. With a desk and a modem on each side of the water, wellies in one place and clothes for city meetings in the other, we have what people insist on calling “the best of both worlds”.

In fact, a peripatetic life brings its own pressures and wouldn’t work for everyone; yet, for us – perhaps because they took us so long to achieve – the dynamic similarities and contrasts between the two spaces are invigorating. And, though ultimately we’re controlled by the demands of our work, we usually manage an even balance of the time we spend in each of them.

The Kerry house was built at the turn of the20th century by the Congested Districts Board. We bought it in 2002 and immediately spent another year in overalls. As soon as a local builder had re-roofed it, Wilf worked full-time on the restoration, while I returned to dodging to and fro, this time mainly at weekends. Later we added a second room at the end of the house that allows us to close a door on each other’s work, as we do in London.

There’s a saying that defines Gaeltacht communities, “ar scáth a chéile a mhaireann na daoine”. It means “people live in each other’s shadows”, aware of each other’s needs and ready with practical help and advice. The help we received from our Gaeltacht neighbours was terrific, from advice about drainage and where to set spuds in the garden to offers of tools and endless cups of tea.

The single space that emerged is empty and tranquil, with an internal hallway removed; beauty-board panelling stripped out; original tongue-and-groove boarding restored and re-used to partition off a sleeping area; and a tiny kitchen and bathroom installed in a 1970s extension. Limestone floor tiles, interspersed with stones from the beach and Valencia slate offcuts given us by a monumental mason, run through both rooms. They took us ages to cut and lay, but the resulting robust and harmonious whole suits the setting and the purpose of the house.

A walk away from Tate Modern, the London flat is a live/work unit in a former Bermondsey jam factory reconceived by the UK architect Ian Simpson. In 2007 we sold our Twickenham house – long free from fruiting bodies – and bought two airy white rooms there from a guy who’d bought them off plan in 2003. There’s a shower room downstairs but, otherwise, he’d kept the spaces open. With separate entrances on the ground and semi-basement floors, and original central pillars supporting the structure, it makes an elegant, practical space for two people. When we moved in it was in perfect condition, which was just as well because, by that stage, we were both fairly knackered.

And – except, perhaps, for the sean-nós singing – dropping in for a drink in our local in Bermondsey is remarkably similar to strolling down the mountain to a pub in Ballyferriter. The accents and the languages are different, but life in inner city London has the same sense of community that you find in Corca Dhuibhne, balanced with the same history of accepting and integrating incomers.

It’s going to be years before anyone understands the full ramifications of Brexit and in the meantime, on both sides of the water, we’ll all just keep on keeping on. It seems ironic, though, that at the very point in history at which the internet is breaking down borders, Britain, with its multicultural heritage, should be doggedly building them up.