Glin Castle in Co Limerick, the celebrated home of the late Knight of Glin, has been removed from the market. The historic castle was placed for sale by Sherry FitzGerald in 2015 with a a price tag of €6.5million. Video: Bryan O'Brien 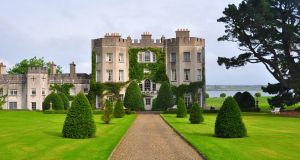 Glin Castle: Located 1.5 hours from Shannon airport and close to very little else, it has to be the ultimate rural escape. 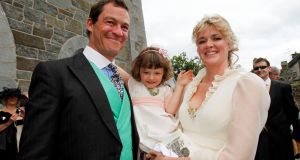 Actor Dominic West and Catherine Fitzgerald pictured with their daughter Dora after their wedding at Glin Church. Photograph: Don Moloney/Press 22

Glin Castle in Co Limerick, the celebrated home of the late Knight of Glin, has been removed from the market. The historic castle which has been in the FitzGerald family family for 700 years was placed for sale by Sherry FitzGerald in 2015 with a price tag of €6.5million. There was both international and domestic interest, but the family were hoping a potential buyer would continue to care for the property, with a view to operating it as a commercial entity such as an exclusive rental or a boutique hotel or wedding venue. “As this wish was not realised the Fitzgerald family have decided to retain the property and may look to embark on such a commercial opportunity themselves in the future.”

The family’s eldest daughter, Catherine FitzGerald, a London-based landscape architect who has worked on the grounds at Hillsborough Castle, may be the family member best positioned to operate the property as an exclusive rental. Not only has she done an exceptional job on the grounds at Glin, but she and her actor husband, Dominic West, spend a lot of time at Glin with their five children.

West is currently riding high on the success of the US hit television series The Affair, after coming to prominence in recent years in the breakthrough crime drama The Wire and a number of big screen roles. Perhaps his growing fame and fortune will help fund any upgrade of the very fine 1,909sq m (20,550sq ft) castle to bring it up to deluxe standard. Given the circles he’s moving in now, he should have no shortage of burned out A-listers desperately in need of R&R to point in the direction of Glin. Located 1.5 hours from Shannon airport and close to very little else, it has to be the ultimate rural escape.

In any case it won’t be the first time Glin has played host to celebrities. Mick Jagger, Marianne Faithfull and Talitha Getty are among the previous guests.

Can receivers clean up and sell the unsightly house next door?