Is your garden looking its absolute best at the moment? An award-winning photographer gives advice on how to take a greatpicture of it, rather than just a good one 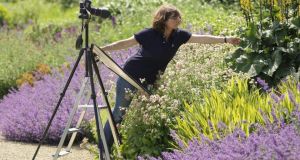 Flick through the pages of any glossy British or American gardening magazine and you’ll almost certainly come across the work of award-winning photographer Andrea Jones.

Her sumptuous shots illustrate a spread on June Blake’s Wicklow garden in this month’s issue of The English Garden for example, while last month’s cover of the American periodical Organic Gardening featured her exquisite close-up of the coneflower, Echinacea purpurea, its rose-pink florets and spiny, fiery-red central cone captured in such remarkable detail that you want to reach out and stroke it.

Jones came to garden photography from a fine arts background (she studied at Bournemouth and then at Salisbury), her interest in plants sparked by a chance meeting with the British primatologist, Jane Goodall, when they struck up a conversation on an airplane. “One of those random events that forever changes the pattern of things.”

By then she had tried advertising photography and discovered she didn’t much like it. So when Goodall invited her to Burundi to photograph chimpanzees, she quickly agreed.

Jones discovered that, while she also didn’t like photographing “chimps hurling through the forest”, she very much liked photographing the native eastern African flora, prompting National Geographic magazine to commission a shoot in Sierre Leone. And so a successful career in garden photography was born.

Over the ensuing 20 years, her work has taken her to almost every corner of the world and to many of its greatest gardens.

She has photographed Roberto Burle Marx’s masterpiece at Monteiro in Brazil, Thomas Jefferson’s Monticello in Virginia, Gertrude Jekyll and Edwin Lutyens’ Hestercombe in Somerset as well as a host of other landmark gardens in Europe, America, West Africa, Thailand and Japan.

Along with running an image library and publishing several books, recent commissions include photography for an upcoming book by Noel Kingsbury that will take her to the US, China, Singapore, Morocco and around Europe.

Last week she came to Ireland, and I met her in the gardens of Ballyfin House (the five-star hotel in Co Laois, ballyfin.com) where I asked her to share her top photography tips.

By the time we met, Jones had already put in a long day’s work, having been up since before dawn to capture the lush beauty of Ballyfin’s restored walled kitchen garden as well as the wild meadows, lake and woodlands in this 610-acre demesne.

So her first piece of advice will come as little surprise. “It’s all about the quality of the light, which is infinitely variable.

“Beginners often think that gardens should be photographed in bright midday sun but by then the light is too hard, too intense, and any colours are burnt out.

“Instead, I photograph in very early morning or early evening, both times of the day when the light is softer, more atmospheric. Many of my best shots have been taken at 4am or 10pm.”

The ability to frame a shot and to give a sense of place – those intangible qualities that separate a great photograph from a good one – is something Jones is known for.

To discover a garden’s finest views, vantage points and any interesting plant combinations,colours and textures, as well as the way the light travels through a garden over the course of a day, she always begins every shoot with a “recce”, ideally in the company of the person who knows it best.

“When I give photography workshops, I advise people to try to get both the bird’s-eye view and the worm’s-eye view of the garden. Try to get an overview from an upstairs window, or even from a small stepladder – a few feet can make all the difference.”

As for plant names, Jones says she has learnt them on the hoof. It helped that she spent a decade living in a house opposite the Royal Botanic Gardens in Kew, London, and attended numerous gardening workshops and lectures, determined to glean whatever knowledge she could.

But far more crucial than a grasp of plant nomenclature, she stresses, is an utter fascination in the subject matter and a deep passion for the craft of photography. It’s clear from looking at her photographs that these are qualities Jones has in spades.

When it comes to camera gear, Jones advises keeping it to a minimum or “as much as you can comfortably carry”.”

Her professional camera of choice is a Nikon D3X while her two “essential” lenses are a 24mm-70mm zoom and a 100mm-macro, but a decent compact camera with a zoom lens made by any of the better-known brands would be a more affordable and suitable choice for the keen beginner.

Whatever the camera, Jones recommends carrying a compact stepladder (light enough to sling over the shoulder), a tripod “to use as an easel and discipline to compose pictures as much as to stop camera shake”, and “a spirit level which you can buy for a few quid to stick on the hot shoe of your camera – invaluable!”

Finally, a lightweight reflector is useful for beaming light into shady corners while a diffuser (easily made of tracing paper stretched on a frame) will soften the effects of bright sunshine.

See Jones’s work at andreajones.co.uk. Her latest book is The Garden Source: Inspirational Design Ideas for Gardens and Landscapes, published by Eight Books.