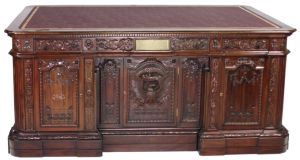 A replica ‘Resolute’ desk made by a US company specialising in reproduction furniture is expected to make €1,500-€2,000 at Fonsie Mealy’s auction.

Like to get your feet under the desk used by the most powerful man in the world? A replica of the desk used by US president Donald Trump in the White House is to go under the hammer next month at Fonsie Mealy Auctioneers in Castlecomer, Co Kilkenny. The 19th century original, known as the Resolute desk, is in the Oval Office and is often seen in official photographs and images of US presidents at work.

The original was presented as a gift by Queen Victoria to president Rutherford B Hayes in 1880. It was made using timber from the famous 19th century British Arctic exploration ship HMS Resolute after which it was named.

HMS Resolute had been part of a convoy searching for the lost Franklin expedition in the Arctic in the 1850s but was abandoned due to the extreme weather conditions. The gripping adventure had captivated the Victorian public. HMS Resolute was later discovered and extricated from the ice by a US vessel and was restored and returned to England as a gift to Queen Victoria from the American people.

She, in turn, was moved to reciprocate the gesture of goodwill and when HMS Resolute was broken up in a dockyard in Kent she ordered the desk to be made to her specifications. In addition to the desk she presented to the White House, she also commissioned a desk for her own use at Buckingham Palace from the timbers of HMS Resolute.

The Resolute desk has been part of the White House furnishings for 140 years and was moved into the Oval Office during the Kennedy presidency.

Auctioneer George F Mealy said the mahogany reproduction desk – made in the US 20 years ago by a manufacturer of reproduction furniture and imported to Ireland by a private collector – has an estimate of €1,500-€2,000. That’s certainly more affordable than a bespoke replica version currently being advertised on the White House gift shop website for $110,000 (€104,000) – albeit for one which is described as featuring “sophisticated and seamlessly integrated advanced technologies that can be customised to your field including science, management, medical, legal, engineering, art, banking, or entertainment . . . and will be the most sophisticated if not uniquely quirky desk in the world!”

The replica desk will be sold during the two-day fine art auction in the saleroom at Fonsie Mealy Auctioneers on Chatsworth Street in Castlecomer on March 7th and 8th. For online catalogue and bidding details, see fonsiemealy.ie