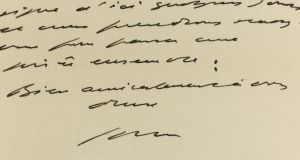 A series of 347 letters and postcards, the great majority autographed and signed “Sam”, were sent by Samuel Beckett to his close friends Henri and Josette Hayden. Photograph: Sotheby’s

Yet another cultural “trophy asset” from the Celtic Tiger has undergone a huge fall in value.

The correspondence, in French, was written by Beckett to his friends Henri and Josette Hayden, who were painters.

The letters are unpublished, although quotes from them were used by James Knowlson for his acclaimed 1996 biography, Damned to Fame: The Life of Samuel Beckett.

Sotheby’s has described the archive as “the most extensive and important series of letters by Beckett ever to be offered at auction”.

Like property, prices for Irish art and collectibles have dropped sharply since the boom.

Sotheby’s said the letters and 100 postcards dated from 1947 to 1985. Beckett had met the Polish-born French painter Henri Hayden and his wife Josette during the second World War, while they were all taking refuge from the Gestapo in the village of Roussillon d’Apt in Nazi-occupied Vichy France. They remained lifelong friends.

“This correspondence is an invaluable account of Beckett’s theatrical career from the first production of Waiting for Godot in Paris in 1952,” said a catalogue note for the auction, adding that it also included “frequent references to members of Beckett’s family” and his visits in Dublin.

One group of letters “of particular biographical significance are those that describe the declining health of his mother (who died in 1950 from Parkinson’s disease), evoking his exhaustion and sense of hopelessness during his last weeks with her in Ireland”.

Some of the letters refer to his fondness for whiskey.

Beckett, who was born in Dublin in 1906, spent much of his life in France, where he died in December 1989. He wrote drama and novels in English and French and is best known for the play Waiting for Godot. He was awarded the Nobel Prize for Literature in 1969.

Last year, a hand-written draft of Beckett’s novel Murphy – in six school exercise books complete with doodles and multiple revisions – was sold for almost £1 million at Sotheby’s to the University of Reading.

How will the Covid-19 era affect our youngest citizens? Let us count the ways
Real news has value SUBSCRIBE