Collection of late Tony Sweeney to be auctioned at Adam’s 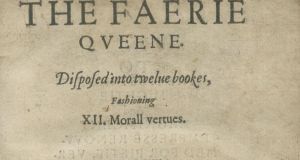 Edmund Spenser’s very rare The Faerie Queene, published in London in 1596, which collector Tony Sweeney described as “the most majestic English language allegorical poem to be written in this country”, is estimated at €3,000-€5,000 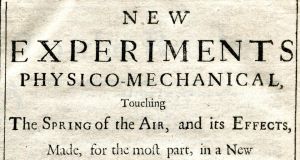 A 1662 edition of New Experiments Physico-Mechanical by Robert Boyle, the “founder of modern chemistry”, which announced what came to be known as Boyle’s Law, is estimated at €600-€800

Collectors of rare books, from Ireland and overseas, will be among the bidders at Adam’s in St Stephen’s Green when a collection of “books, broadsides and pamphlets associated with Ireland 1475-1700” goes under the hammer on Tuesday. The sale features some 300 lots from the private library of the late Tony Sweeney, the renowned collector and Irish Times racing correspondent, who died in 2012.

Adam’s said Sweeney had tried to collect “the best possible copy of every book or pamphlet that could be shown to have a connection to Ireland before 1700”.

In a catalogue note, Prof Andrew Carpenter of UCD’s school of English describes Sweeney’s collection as the “finest such library in private hands” and “the most significant untapped resource of printed materials for research into 16th- and 17th-century Irish history, literature and civilisation in the world”.

Among many highlights is lot 243, Edmund Spenser’s exceedingly rare The Faerie Queene, published in London in 1596, which Sweeney himself described as “the most majestic English language allegorical poem to be written in this country” – estimated at €3,000-€5,000.

Lot 165, An account of the sessions of Parliament in Ireland, 1692 (estimated at €500-€700) illustrates how hard-working Irish parliamentarians were in the late 17th century with “committees sitting frequently till eleven a clock at night, and the House never rising before two” – which, Adam’s noted, “may come as a nasty shock to their modern Dáil counterparts”.

A 1662 edition of New Experiments Physico-Mechanical by Robert Boyle, the “founder of modern chemistry”, which announced what came to be known as Boyle’s Law, is estimated at €600-€800.

The book, dedicated to Oliver Cromwell, contains observations on Ireland’s “situation, greatness, shape and nature”; natural resources including “metalls, mineralls, freestone, marble, sea-coal, turf, and other things that are taken out of the ground” ; and “the nature and temperature of its air and season, and what diseases it is free from or subject unto”. The auction also includes rare early Irish maps (94 lots from two private collections) including two by Antonio Lafreri, estimated at €5,000-€7,000 and €6,000-€8,000 respectively.

The second session features historical memorabilia and the top lot is the 1916 medal of Kathleen Clarke, wife of Tom Clarke, first signatory of the Proclamation, which is estimated at €25,000-€35,000.

Original letters by Pádraig Pearse concerning funding for St Enda’s (the school he founded in Dublin) are estimated at €10,000-€12,000. Viewing in Adam’s saleroom 26, St Stephen’s Green, Dublin 2 this weekend and until Wednesday, when the auction begins at 11am.

Coronavirus: This is bigger than all of us but it’s about every single one of us
Real news has value SUBSCRIBE