French signature lights, furniture and art snapped up at Adams 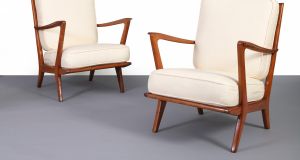 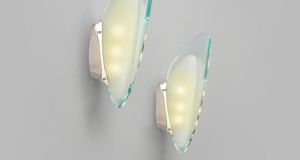 Tuesday saw Adams hold its first ever mid-century sale at its St Stephen’s Green premises, to an audience of both Irish and international bidders. The room filled up quickly and over the course of the evening 80 per cent of lots sold, with online bidders from Italy, Denmark, France and the United States vying for the signature 20th-century pieces on offer. For some attendees, it was their first ever auction – sitting nervously amongst more seasoned bidders.

The highlight of the show was a series of sculptural light fittings by French artist and decorator Max Ingrand. His Micro and Le Cozze wall sconces (Lots 47 and 48) sold for €3,000 and €3,500 respectively – their estimates were €3,000- €5,000. The Model 2127 ceiling light in nickel-plated brass and glass (Lot 46) opened bidding at €6,000, and was withdrawn at €8,500, not having reached its reserve – but is currently being sought by an American client, according to Nicholas Gore Grimes of Adams, who curated the sale.

“One of the most important factors which has a significant impact on astronomical prices is provenance” says Gore Grimes. “For example, when you look at the prices achieved in the David Bowie collection – buyers paid 10 times the value of the pieces due to the fact they were owned by Bowie.”

The bargain of the evening was a set of three Felim Egan lithographs (Lot 62) snapped up for €300 – a price which would barely cover the cost of the frames.

“We are really delighted with the sale” says Gore Grimes, “as we achieved an 80 per cent sale rate and the artwork did considerably well – as far as the furniture pieces are concerned, I feel that Irish people are buying because they truly love the objects – rather than seeing them as investments.”