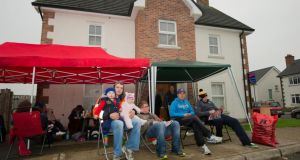 The 11 houses go on sale tomorrow on a first-come-first-served basis, according to Gunne Auctioneers, who are managing the sale on behalf of Dublin-based receiver Farrell Grant Sparks.

Ciara Downey is renting a house in Knock Carrick and is the first in the queue. “We didn’t want to wake up here one morning and see that a queue had already started,” she said.

Storyboard: This is the best cafe food I’ve eaten in Ireland

Is it possible to have no-strings sex with an ex?