Workers suffer in silence as chronic conditions not revealed to employer

Many people fear discrimination if they tell their boss, but honesty and trust can help 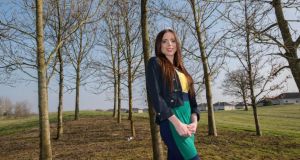 Aoife Weller, who suffers from rheumatoid arthritis, near her home in Mullingar. Photograph: Brenda Fitzsimons

Many people do not disclose chronic medical conditions and hidden disabilities to employers for fear they will be labelled, treated differently or jeopardise their future career prospects.

According to Eithne Fitzgerald, head of policy and research at the National Disability Authority (NDA), research shows fear of disclosure is very common, particularly among people with mental health difficulties.

The Health Service Executive defines chronic illness as “long-term conditions which can be treated but not cured”. It lists diabetes, heart failure, chronic obstructive pulmonary illness, dementia and mental health problems, asthma and muscoloskeletal diseases such as arthritis as examples. Other chronic illnesses that people try to hide in the workplace include migraine, multiple sclerosis, epilepsy, cancer, glaucoma and Crohn’s disease.

Employees with a chronic illness are protected from discrimination on the grounds of their disability through employment equality legislation, which does not require a person to disclose that they have a disability. Employers are obliged to provide “reasonable accommodation” to ensure that people with disabilities have access to and can participate or advance in employment. This can involve adapting equipment or premises, giving time off to attend medical appointments, or substituting an employee’s duties.

A National Economic and Social Forum report on mental health and social inclusion published in 2007 revealed negative attitudes among employers resulting in risks for employees disclosing any mental health difficulty. Many employers considered it a risk to employ people with mental health issues and admitted they would be less likely to promote them, and likely to reduce their level of responsibility.

Arthritis Ireland and employers’ group Ibec are founding members of the Fit for Work Ireland coalition, working to improve conditions for people with musculoskeletal disorders (MSDs) in the workplace. Musculoskeletal disorders, and back pain in particular, are the leading cause of temporary work disability among Ireland’s working-age population.

With numerous studies showing a strong association between unemployment and poorer physical and mental health and wellbeing, Fit for Work (see iti.ms/1E5XmvX) has developed a comprehensive set of guidelines for employers and employees about working with arthritis, back pain and related conditions covering everything from disclosure and legal rights to prevention, early intervention and management of MSDs in the workplace.

Psychologist Maeve Halpin says the fear that they will be judged negatively by their employer or colleagues can cause much stress and anxiety for people with chronic illnesses. Her advice is to be as upfront about the situation as possible and to think about the situation from your boss and company’s point of view.

“The person needs to have got their head around their own relationship with their condition before they go to their employer, and to be positive and practical, not emotional, in their approach. They need to let their employer know what their needs are, whether that means modifying their work environment or allowing them to work flexitime or from home, for example.

“At the end of the day, the boss wants to know that the job is being done properly and doesn’t want any hassle so the employee needs to go to him or her with a pre-prepared and realistic solution.”

Dr Paul Gueret, an occupational medicine physician, says the number of people who sit on medical complaints at work for fear of management finding out is probably “not insubstantial”.

“Often companies require new employees to fill out a pre-employment questionnaire in which they are asked to disclose any medical conditions, but a lot of people are terrified that if they do disclose, they won’t get the job.

“We know for a fact that there is nondisclosure because we see it five or six years down the line when we are called in because of some problem and the employee tells us they had the condition for 12 years: yet when we look at their pre-employment questionnaire, there is no record of it.”

So, how realistic is the fear of disclosure? From his experience of carrying out thousands of pre-employment assessments for companies over the years, Gueret says it is extremely rare for somebody not to get a job because of a medical condition once they are capable of carrying out the role. There are situations, he explains, where a job may have to be modified, or restrictions put in place – for example, to limit somebody who has epilepsy from driving a forklift or climbing ladders as part of their duties.

Gueret advises people with illnesses that may interfere with their work performance to be open about their condition with management from the start, pointing out that HR departments will not take the news as kindly if they find out later because the employee is underperforming.

There is no need to disclose the exact nature of their illness, he advises, only the aspects that will affect their performance in the role.

Eithne Fitzgerald of the NDA says: “Many people with invisible disabilities do not disclose them in the workplace and this is not purely an Irish phenomenon, it’s worldwide. They are worried about stigma and concerned that they will not be considered promotable.”

However, Fitzgerald says disclosure is very important in the context of evacuation planning as anybody with a disability should have their own personal evacuation plan. In a fire situation, for example, a deaf person might not hear the alarm, somebody with asthma could be overcome earlier by smoke or somebody who suffers from panic attacks might panic.

Maria Hegarty, director of the Equality Strategies consultancy, has come across situations where people with mental health issues hide their illness in the workplace because they are afraid of being judged negatively, treated differently or isolated from their colleagues.

“It can be more difficult for people to open up about their illness in certain work situations where there have been difficulties in the past.

“It depends on the culture of the organisation and even the profession. Good communication is essential in the workplace to create a good sense of trust and confidence in employees and employers.”

‘My boss allowed me to work the late shift’

Shortly after she turned 18, Aoife Weller was diagnosed with rheumatoid arthritis, which affects every joint in her body from her jaw to her little toes. Her first real job after college was an administrative role in a sales office.

She spent nine months hiding her rheumatoid arthritis (RA) from her employer and colleagues before the constant battle with colds, flus and infections and hiding her painful, swollen joints, and a flare-up of her condition landed her in hospital for several weeks.

When she returned to work, 26-year-old Weller finally told her employer she was suffering from RA, and about how it affected her. He was shocked that she had managed to keep it hidden for so long. “He was very good to me,” she says. “I know other people who were not so lucky. I was allowed to work the late shift as my arthritis was worse in the morning, I got a heater beside my desk because I was always cold, and my work station was ergonomically corrected.”

However, as the start-up company Aoife worked for began to grow, her workload grew and she became very stressed, causing her arthritis to flare up. She finally made the tough decision to give up work as she was in constant pain.

“If I had known about the Fit for Work principles such as early intervention, I would have known to go to see an occupational health specialist and I may have been able to stay in the job. I am still trying to get a job but I think the best thing would be to start part-time and build up to full-time hours.

“In the meantime, I keep myself busy and do a lot of work for Arthritis Ireland as secretary of the Westmeath branch and am a leader on its Living Well with Arthritis courses.”