When she was 12, Rebecca was told her lower jaw was dissolving

During treatment, Rebecca Heasley’s lower jaw had to be broken and moved two centimetres to fit an implant from her hip 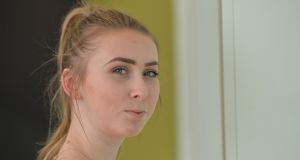 Rebecca Heasley: ‘To think I’m on the other side of it is just insane, and I couldn’t be happier with the results so far.’ Photograph: Alan Betson / The Irish Times 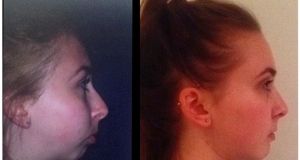 Rebecca Heasley before and after the eight-hour surgery in which bone was taken from her hip to rebuild her jawline.

Teenage years are difficult enough but to be told at 12 years of age that part of your lower jaw is dissolving, and will “underhang” as the rest of your face continues to grow, could be devastating.

However, in “some bizarre way”, it was news Rebecca Heasley from Greystones, Co Wicklow, had been expecting. She knew “something wasn’t quite right” with her mouth. When an orthodontist at St Colmcille’s Hospital, Loughlinstown, referred her to Prof Gerry Kearns at St James’s Hospital in Dublin, she said she “wasn’t really surprised”.

It was in consultations with Kearns at the National Maxillofacial Unit at St James’s that Rebecca heard for the first time the words “diopathic condylar resorption”. This is a rare condition in which a jaw becomes misshapen and can result in difficulty eating and even breathing.

On the cusp of starting secondary school, Rebecca was told the condition could be addressed by surgery, but not until the rest of her face was fully grown, at the other end of adolescence. Her lower jaw would continue to recede while the upper one would continue to grow. In the meantime there would be countless consultations and measurements, the removal of excess teeth, and ongoing visits to the orthodontist.

In January 2016, eight years after her diagnosis, Rebecca underwent surgery. It involved an eight-hour operation and bone was taken from her hip and used in her jaw. Her lower jaw had to be broken and moved two centimetres forward to accommodate the new implant. Then her upper jaw had to be broken to realign her bite with her lower jaw – a feature which slightly changed the angle of her nose.

Naturally she felt pretty beaten up for the first week or two after surgery and there was a danger of losing sensation in her lower lip and chin. Her upper and lower teeth were braced together, her jaw was a mass of bandages and drains, food came in liquid form and was consumed through straws.

But once the swelling went down and her face began to heal, she could see the improvement.

She started a blog on Instagram, writing at the end of week two: “Chipmunk look has calmed slightly. There is still swelling around my cheeks, lips, chin and jaw line. My lower lip has some sensation back but my chin is still completely numb. Aoul hip is healing well . . .”

Writing on her thoughts in recent weeks she said: “To think I’m on the other side of it is just insane, and I couldn’t be happier with the results so far.

“I’m still quite swollen around my neck and lower jaw line, but a lot less than I was this time last month.”

In fact, her progress was so good that Rebecca has decided not to take a month out from her studies of Spanish and linguistics at University College Dublin (UCD). She said she needed to keep up with college work so she could go to Chile this summer, on a South American Erasmus-style trip that involves spending a year at a Spanish- speaking university.

The eldest of a family of three boys and three girls, Rebecca says she now wants to help others in a similar situation. She is already in conversation with people around the world via her blog and is in the process of putting together a video documenting her experience.

“I would like my story to give courage to other people in my situation to have the surgery. It is important for people to relate to people and raising awareness of idiopathic condylar resorption and providing reassurance is so important to me now.”

The National Maxillofacial Unit at St James’s Hospital is unique in that it requires postgraduate training in both dentistry and medicine. The aim of the speciality is to provide a comprehensive diagnostic and surgical service.

Oral and maxillofacial surgery deals with the diagnosis, evaluation and treatment of conditions arising on the face, in the jaws, mouth and their environment including the upper jaw, lower jaw, nose, neck and salivary glands.

Further information for GPs and patients about the National Maxillofacial Unit is available from stjames.ie

Hands hurting from all the handwashing? Here’s how to show them a little TLC
6