Lena the gorilla at Dublin Zoo will breastfeed her baby for up to five years. Most Irish women stop after a few weeks 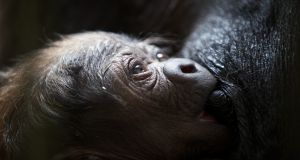 Lena, the western lowland gorilla at Dublin Zoo, breastfed her baby immediately and will continue to do so for up to five years. She “did not need a lactation consultant to urge her to do what is best”. Photograph: Patrick Bolger

The sight of Lena, the western lowland gorilla, cuddling her new-born baby in Dublin Zoo was heart-warming. In media photos she looked pleased with herself and her baby looked alert and secure.

Zookeepers are unable to determine the sex because Lena is keeping the baby close to her chest. According to Helen Clarke-Bennett, leader of the animal care team responsible for the gorillas, “she will continue to cradle the baby in her arms for the next two to three months”.

Lena breastfed immediately and will continue to do so for up to five years. Like all animals, gorillas are guided by their instincts in the way they rear their young, ensuring the survival of the species. Gorillas are mammalian primates, as are humans, but there the resemblance ends.

Most Irish women do not breastfeed and many of those who do, stop after a few weeks. The latest Perinatal Statistics Report 2014, published in June 2016, shows that fewer than half of Irish women (46 per cent) were breastfeeding at the time of discharge from hospital. The rate for 2013 was 56 per cent, so fewer women are now breastfeeding. In fact, Ireland has the lowest breastfeeding rate in the world. The figures for 2014 are more worrying when the mothers’ age profiles are analysed. Fewer than one-fifth of infants born to mothers under 20 years were exclusively breastfed on discharge from hospital and only 29 per cent of women aged 20-24 breastfed. As with all health statistics, and every report on health ever published, social class and education matter. Better- educated women were more than twice as likely to breastfed as less well-educated women. Is there something wrong with Irish women’s breasts? Or, more likely, is it a cultural problem?

The reason so many Irish women choose to bottle-feed is complex and the trend began in the 1940s. According to Caitríona Clear in The Decline of Breast-feeding in Twentieth-Century Ireland (Irish Women’s History edited by Alan Hayes and Diane Urqhuart) “there were reasons other than the hospitalisation of childbirth for the rise in bottle-feeding”.

Everyone in authority at that time was in favour of breastfeeding, including the Catholic Church and the Department of Health. Most maternity hospitals insisted on it.

“Propaganda which sternly emphasised breastfeeding as the mother’s duty would have been counterproductive, annoying and irritating for women. One can only conclude that the majority of Irish mothers turned consciously and firmly away from breastfeeding in these years.

By doing so they were not only defying the authority of medical experts, but also discarding the advice and expertise of their elders. In the overwhelming Catholic population, most of them had little choice about pregnancy. The method of infant feeding was one area of their reproductive lives over which they could, and did, exercise control.”

If this theory is correct – and it sounds plausible – it is a huge pity that women chose a form of protest against patriarchal authority that negatively affected their child’s health. Women also ignored their instincts which surely affected their emotional health.

It was not easy 50 years ago to say no to authority figures. It is now 2016 and women can make their own choices. Most of them unfortunately choose bottle-feeding. Can anything be done to ensure women breastfed instead? The HSE’s Service Plan 2016 has a high level action “to promote and increase breastfeeding uptake rates”.

An action plan for breastfeeding will be completed before the end of the year. There is also a website breastfeeding.ie.

But information and education, no matter how intense, will not be enough to reverse a bottle-feeding culture.

Lena the gorilla did not need a lactation consultant to urge her to do what is best for her baby’s health. If patriarchy was responsible for the, almost, demise of breastfeeding, then it is patriarchal attitudes and culture that have to change.

It is no coincidence that Saudi Arabia, the most patriarchal country in the world, has the same breastfeeding rates as Ireland.

It’s time for women to take back control over all processes related to pregnancy and birth. Experts need to stop telling women what to do and giving advice. Women need to assert themselves more, listen to their instincts, and start saying no to anything that might interfere with breastfeeding such as housework and taking care of other people’s needs.

Instincts are still there, buried under all the medical palaver that accompanies childbirth in this country.

Jacky Jones is a former HSE regional manager of health promotion and a member of the Healthy Ireland Council. drjackyjones@gmail.com