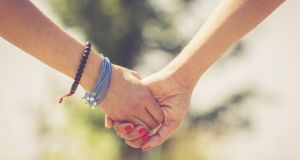 Women who responded to The Irish Times sex survey were more likely to identify as bisexual rather than lesbian, while the converse applied to male respondents. Photograph: Thinkstock/Getty Images

A striking finding of The Irish Times sex survey is that same-sex attraction among heterosexual women is far higher than previously thought, with 45 per cent of 17- to 34-year-old heterosexual women – nearly half – having been attracted to another woman.

“Heterosexual men are more focused on heterosexual intercourse, and there is a link between heteronormativity and masculinity, so there may be more of a taboo among men about same-sex attraction,” she says.

Women are also more likely to identify as bisexual rather than lesbian, while the converse applies to men.

Lesbians indicate a very high level of enjoyment of sex, with 68 per cent indicating that they “really enjoy it”, compared with just under half of heterosexual women (49 per cent). Also, just over half of lesbians (51 per cent) report being “very happy” with their sex lives.

When asked about happiness in their sex lives, bisexual males had the lowest “very happy” score (25 per cent), with 51 per cent of lesbians being “very happy”. Heterosexual and homosexual men were equally “very happy” at 30 per cent for both.

Why are lesbians happiest?

However, it is important to say that these figures are based on a low number of respondents (173).

Gay men who took the survey were more moderate in their enjoyment and happiness, but were still happier and having better sex than heterosexual and bisexual men. Among gay men, 54 per cent “really enjoy” sex and 40 per cent enjoy sex “mostly”. Thirty per cent of gay men are “very happy” with their sex lives and 39 per cent are “somewhat happy”.

Irish woman in San Francisco: Life is quiet but everyone is exercising
5