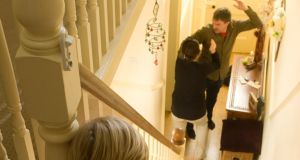 The Indian rape case is another reminder that violence against women keeps on happening. Commentators spoke with amazement about the level of violence and sexual harassment of women in India, a country in which they are “revered”. Many Indian gods are female. This is part of the problem.

Every religion has saints and goddesses who contribute to cultural values that may protect women who conform to what society expects of them, particularly sexually, and condone violence when women do not measure up.

As no woman can ever be saintly or godlike, religious views of how women should be provide a never-ending justification for abuse. Catholic women have the Virgin Mary to live up to.

The aim of religion is to frighten women about how men and society will punish them if they do not conform to idealised behaviour.

The Women’s Aid Annual Report 2012 notes that one in five women in Ireland experiences violence and abuse from an intimate partner. Last year the organisation received 32 calls every day from women living in fear, and almost 16,000 disclosures of abuse. Recently, a teenage girl subjected to physical and verbal sexual harassment received the maximum award of two years’ salary from the Equality Tribunal.

Her supervisors told her: “You are only letting on to be a little Virgin Mary to your mammy. We know what you really are.” These attitudes and beliefs about women are only a step away from sexual assault.

The Council of Europe has 47 member states and seeks to develop common legal principles based on the European Convention on Human Rights. The Council of Europe convention on preventing and combatting violence against women and domestic violence (also known as the Istanbul convention) opened for signature in May 2011 and, to date, 26 member states have signed up and five states have ratified it.

The treaty will enter into force when it has been ratified by 10 countries.

Treaty on violence
The purpose of the convention is to protect women against all forms of violence and punish offenders appropriately.

This international treaty defines gender for the first time and the way male and female roles are decided by society, not biology.

“Violence against women is a manifestation of historically unequal power relations between women and men which have led to domination over, and discrimination against, women by men.”

Aggravating circumstances, deserving a more severe punishment, will include being spouses, partners and family members, and violence in the presence of children.

Ireland has not yet signed the Convention because, according to the Department of Justice and Equality, “Article 52, which deals with emergency barring orders, presents a particular difficulty in relation to property rights under the Irish constitution.”

Constitution a barrier
While interim barring orders are available in “emergency” situations, such orders are limited in their application to “persons with an equal or greater interest in the property”.

Article 43.1.1 in the Constitution relates to the right to private property.

“The State acknowledges that man, in virtue of his rational being, has the natural right, antecedent to positive law, to the private ownership of external goods.”

In May, Minister of State Alex White said Ireland would sign the treaty only when the State is in a position to ratify it. Just not now.

Once again it seems that the Constitution is a barrier to protecting people at the receiving end of violence and abuse.

The 2013 Review of Practice and Audit of the Management of Cases of Neglect: Report on the Findings of the Pilot Phase of the National Audit of Neglect showed that children’s circumstances did not improve because of a “cultural commitment to keeping families together at all costs”.

Now women living in Ireland cannot be fully protected because of the constitutional right to private property. What a country.

Women don’t want to be worshipped or put on some pedestal. They just want to be treated like human beings with the same rights as men.

It doesn’t seem too much to ask.

This Connemara coastal home will blow you away
6

‘At night I would go to my room to quietly drink.’ Irish women and addiction
8