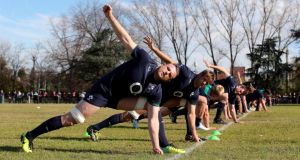 Research, which involved 40 rugby players on the Irish squad, suggests links between diet and exercise and the diversity of microbes in the gut. Photograph: ©INPHO/Dan Sheridan

The human gut typically harbours trillions of bacteria, and having many different types of bugs in there tends to be linked to good health, said Fermoy-based Teagasc researcher Dr Paul Cotter, who is a principal investigator with the Alimentary Pharmabiotic Centre.

“In general, a diverse gut microbiota is considered healthy, while less diversity is linked with bowel conditions and obesity,” he said.

“Diet is thought to have an impact on the diversity of gut bugs, but we know very little about the impact of exercise on the gut microbiota in humans, which is why we wanted to look at these athletes.”

The researchers analysed bacterial DNA in faecal samples taken from the athletes in the training period before the last Rugby World Cup, and in samples from 46 male volunteers who are not professional athletes. From this, they worked out that the rugby players sported a higher diversity of gut bacteria.

The research, which was carried out with the Irish Rugby Football Union and University College Cork, also analysed diet and blood samples and, perhaps unsurprisingly, found that the rugby players ate more protein and had higher levels of metabolic fitness than the volunteer controls.

“Our statistical analysis pointed to both diet – and particularly protein consumption – and exercise being linked to a greater diversity of gut bugs,” said Dr Cotter.

The study, published in the journal Gut, just looked at one point in time, so the APC is now carrying out research with volunteers to see what impact increasing exercise or protein individually has on the gut microbiota over the course of eight weeks, he said.

“I’m not suggesting that everyone has to go out and train like a rugby player,” said Dr Cotter. “But I think . . . we are going to find that exercise is important for the health of gut micro-organisms.”

Should we hand over the deposit for a house before getting all the documents?
4

Is my husband racist? He says Black Lives Matter is irrelevant.
Real news has value SUBSCRIBE