What type of parent are you? Dolphin? Snowplough? Helicopter?

From naughty steps to crying it out, parenting fads come and go. So what’s the deal? 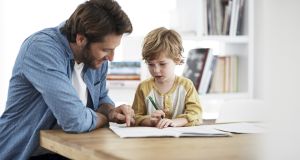 The Helicopter parent hovers constantly over their child and is over-involved in their lives, particularly in relation to their education. Photograph: iStockphoto

Parenting advice is an industry. New fads and methods come and go, and the often conflicting advice is confusing for parents. Are you going to damage your child if you let them cry it out? Will the naughty step lead them to resent and hate you? What is the right amount of screen time for a 14 year old? We have come to rely overly on the “expert” in our search for the “right” way to raise a child. The bottom line is that if there was a single good way to raise a child, there would be just one bestselling book on parenting.

One problem for parents is that while there is lots of advice around specific strategies or tools – the naughty step, time-out, behaviour charts, active listening – there is less focus on more fundamental parenting styles and how these impact on children. Research has consistently shown that it’s not so much the specific strategies we use, but rather our broader approach and attitudes which affect how our children turn out.

So before we reach for that nearest “how to” book to solve the latest child-rearing crisis, it’s worth reflecting on ourselves as parents and asking “what type of a parent am I?”

Every psychology student will be familiar with Diana Baumrind’s three basic styles of parenting from the 1960s: authoritative, authoritarian and permissive. A fourth style – uninvolved – was added to the mix by Maccoby and Martin in the 1980s.

The four styles are based on a parent’s functioning on two key scales; how demanding and how emotionally involved they are with their child.

Baumrind’s model, which has been around more than 50 years, and its later revision have stood the test of time and we continue to see these core parenting styles trotted out and rebranded under different names.

The Authoritative parent (now rebranded as the Dolphin parent) is high on the demanding scale and high on responsiveness; they set clear expectations but are in tune with their child’s emotional needs. The Dolphin swims alongside their child teaching them skills and judging the balance between ensuring safety and allowing them the freedom to take risks. This style is seen as the gold standard and more likely to turn out happy, balanced and secure children who have the resources to problem solve and lead independent lives.

The Authoritarian parent is highly demanding but low on responsiveness. This is the “because I say so” parent who lays down the law without considering the child’s needs or wishes. The recent Tiger Mom phenomenon has a lot in common with this style. Children of Authoritarian parents can be very conformist but may grow up to resent and reject authority and, because they have little decision-making power, they often lack problem-solving skills.

Uninvolved parents have low or no expectations and provide little or no emotional support. This is often referred to as neglectful parenting. This style has the potential to cause the greatest negative impact and can produce insecure children with no sense of boundaries.

We can add into the mix a few minor variations on the four basic styles. There’s the Helicopter parent who hovers constantly over their child and is over-involved in their lives, particularly in relation to their educational success.

The Lawnmower or Snowplough goes one step further and smooths everything out in their child’s path, anticipating and dealing with potential problems. These styles are partly responsible to the new breed of over-protected and cosseted “Snowflake’ children who ‘melt’ in the face of challenge or adversity.

In her new book, The Gardener and the Carpenter, Alison Gopnik, professor of psychology and philosophy at University of California, Berkeley, suggests just two basic approaches to parenting; the gardener and the carpenter.

The carpenter parent believes that, like making a chair, you start with basic raw material and can fashion a child into your idea of what they should be.

The gardener, on the other hand, creates a safe and protected space within which the child can grow and develop as an individual. Some plants (skills and traits) will grow and flourish, while others, despite your attention and support, will wilt and die. In our house, Irish dancing, after years of careful nurturing, was finally consigned to the compost heap.

This ideal of the gardener parent is not a million miles away from the Authoritative parent of old.

But it’s not as simple as just deciding that you will be a certain type of parent and producing a certain type of child. Children have their own personalities and genes which bring out different reactions in you.

So, instead of thinking of parenting as a series of strategies and steps, focus on the more basic fundamentals of trying to spend quality time with your child, being consistent, fair, patient, affectionate and involved.

Set clear boundaries and expectations but also allow your child enough freedom to learn from their own mistakes. Keep adapting your style to your changing child and, like the gardener parent, admire the roses but try to ignore the weeds.