Issue of consent will be in Human Tissue Bill, says Department of Health 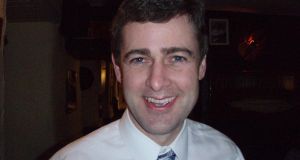 Fianna Fail senator Mark Daly: called for an early recall of the Seanad to debate the issue.

The Irish Kidney Association has expressed its disappointment with the Government’s approach to legislation on organ donation. The newly appointed chairman, Stephen O’Sullivan, said “it wasn’t done right”.

The Seanad has been recalled to sit next week to debate regulations signed last year by the Minister for Health to transpose an EU directive into Irish law.

While the Government plans to introduce an “opt-out” organ donation policy, where consent for donation is presumed, it is a “soft opt-out” provision, which means the consent of relatives of the deceased will be required.

A Department of Health spokesman said that while the regulations had been signed, there had been no implementation of an opt-out system. That will be considered in the Human Tissue Bill that is currently being drafted.

However, Mr O’Sullivan said there was supposed to be one “competent authority” in a leadership position but the State had decided to divide responsibility between the Irish Medicines Board and the HSE.

“We already have a national organ donation and transplantation office within the HSE. Why not use it?” he asked. Responsibility was being dispersed and there would be no leadership, he said.

Senator signatures
Fianna Fáil senator Mark Daly gathered the signatures of 20 senators for an early recall of the Seanad to debate the issue. Mr Daly said the Government’s legislation was merely reinforcing the status quo and would do nothing to increase the rate of organ donation.

He said it didn’t matter whether there was legislation in place if there was not a single authority in charge to drive the issue.

One of the 20 senators who signed the early recall motion, Independent Senator Feargal Quinn, introduced his own legislation on the issue several years ago.

Mr Quinn said yesterday that, “We need a system with an infrastructure. In the North there are 27 nurse co-ordinators and we have zero,” he said of nurses who liaise with families to seek their consent. And he believed there should be one competent authority in charge.

Mr Quinn also expressed his disappointment that the regulations were signed last August without debate.

The EU directive allowed for more than one competent authority to individually facilitate Scotland, Wales and Northern Ireland but Ireland used this to divide competencies between the HSE and the Irish Medicines Board. Mr Murphy said every successful transplantation saved the State €750,000 over 15 years in dialysis costs.