Nutrition: Kids may be great at eating, but cooking is not always their forte

The way to a child’s stomach is not culinary osmosis; it’s through explaining and teaching, says John McKenna 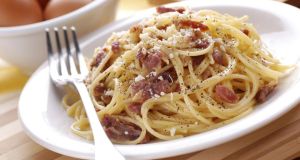 Making carbonara is difficult. Because there is little or nothing to it, the potential for failure is huge. Photograph: Thinkstock

There is a widely held, romantic notion that the children of cooks and food writers are themselves gifted cooks, their skills learnt through patient instruction from their folks, along with a spot of culinary osmosis.

The truth, of course, is very different. The children of food professionals have no more interest in cooking than the kid in the street. Their interest is in eating, and in that regard, they conform to the norm.

There is the daughter who says: “I can’t eat that red meat ’cause I’m a vegan, so I’ll just have a sausage.”

(Don’t deride Bloke Food, by the way: just clean up that technique a little and you very quickly arrive, believe it or not, at that modern culinary holy grail that we call ramen.)

And while you might teach other folks how to cook for a living, you can be sure that your children do not want to learn from you. The food professional’s paradox is much like the fate of the cobbler’s children: so much water, so close to home.

And then one day, the seriousness of the lacuna you have allowed to happen hits you. The chef Cal Peternell, of Chez Panisse in California, describes it this way:

“I consider cooking and eating with my family my best skill, and so it was with a little surprise, and a little shame, that I realised my eldest son was only a summer away from leaving home for college, and I hadn’t taught him, or the other kids, how to cook . . . they certainly were masters of the coming-together-to-eat part, but the actual gathering-and-cooking-of-the-food part . . . well, I guess I thought that would just be effortlessly communicated and instinctively absorbed.”

Even with a summer crash course of instruction, Peternell is soon receiving the urgent text messages and Vibers and phone calls: How do I do this? How long should this take? What temperature should the oven be at?

PJ’s first outing with the book, after the traditional holiday wrestling with his brother over who was going to cook their pasta lunch (this is at 3.45pm, of course) was to cook pasta carbonara.

Making carbonara is as difficult as tightrope walking or rock climbing. Because there is little or nothing to it – butter, bacon, eggs, cheese, pepper, pasta – the potential for failure is huge.

It is one of the defining Italian dishes, in which you aim to make a little into a lot. And you can achieve that only by having a sure-shot technique. All the pieces have to fit. If you resort to using cream, as many recipes do, you are not being true to the dish.

So, lots of water was boiled, and lots of salt chucked into it, followed by the pasta. The bacon pieces were cooked to render the fat. The eggs, cheese, salt and pepper were beaten together in a bowl. Plates were warmed.

Then it was finished in a flash – pasta drained, water saved, into the pan, egg mixture on top, toss, toss, add pasta water, toss, spoon into the bowls, add more cheese at the table. Now eat.

Standing on the sidelines of all this, confined to barking out what were surely helpful instructions – “Hurry up! Faster! Hurry up!”– I was as nervous as a deer caught in headlights.

I needn’t have worried. The lads ate, looked at each other, and said: “This is like La Cucina.”

In our house, that is the highest praise, because the pasta dishes cooked by Bruno Coppola and his team in La Cucina, just outside Limerick, are the stuff of legend. Coppola’s pasta dishes work because of their sublime simplicity and their sublime textures.

With Cal Peternell as his guide, PJ took his cooking to a higher place, by following instruction, by paying attention to detail. He was allowed to understand that great cooking can be just a hair’s breadth apart from good cooking.

And that is why Twelve Recipes is a valuable book, and a key element in the quest to empower young people to take control of their health by having confidence and control with their cooking.

At the time of writing, PJ has yet to give a firm indication of when he will cook the twice-cooked pork dish, on page 222, for his parents.

Twelve Recipes, by Cal Peternell, is published by Harper Collins

John McKenna is author of Where to Eat and Stay on the Wild Atlantic Way.