Doctors say people are abusing drugs such as painkillers and sleeping tablets, and many have secondary addictions 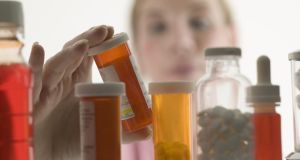 For years, drug addiction in Ireland was associated with heroin. Many of the available drug services are focused on methadone treatment for heroin users.

But medical professionals say the addiction picture has become more complicated in recent years, with more people abusing drugs such as painkillers or sleeping tablets and having associated “process addictions” such as gambling or exercising.

The internet has become a portal for accessing drugs, according to Dr Colin O’Gara, head of the addictions unit at St John of God Hospital, a private treatment facility in Dublin.

He has seen a rise in over-the-counter codeine addiction, and while younger people tend to take more excessive amounts of it, the problem extends to all age brackets.

“I’ve treated people in their 70s and 80s who didn’t realise, until they ran into significant difficulty, that they had a problem with taking excessive codeine,” he says. Those difficulties include stomach problems and other side effects.

Although the drug is no longer on general display in pharmacies, he says people are turning to the internet to access it and other substances, from benzodiazepines (benzos) to illicit drugs such as cocaine.

“A big problem with buying drugs online is that nobody knows what they’re actually taking,” he says.

The drug PMMA (Paramethoxymethamphetamine) is especially dangerous, according to O’Gara. It is similar to ecstasy but with a much slower onset, so people often take a second pill thinking the first one did not work. He says there have been “a lot of deaths” from PMMA overdose.

O’Gara says most people present to his facility for alcoholism, but there tends to be an add-on addiction, either another drug or a “process addiction” such as gambling, gaming or eating.

He says one in 10 people seeking treatment for addiction do so for gambling problems, which are associated with a host of psychiatric and physical complications. “Gambling has completely shifted to online. Now, particularly with young people, it is phone-based. So you have young people gambling on a tennis match in South America at night, unbeknown to anybody in the family.”

O’Gara has had patients with exercise addictions, often combined with the use of benzos or steroids, particularly in young men. “Preoccupation with body image is a big issue right now with young men across the board,” he says.

“We saw more and more people coming into the service looking for needles to inject steroids. We wanted to find out a little bit more about that,” says Mark Kennedy, head of day programmes at MQI.

What they found was that the average steroid user was male, age 27, white and heterosexual. They took steroids to increase muscle mass and strength, to look good and to increase confidence. More than 85 per cent exercised four or more days a week.

Dr Garrett McGovern is a GP specialising in alcohol and substance abuse at the Priory Medical Clinic in Dublin. He also works within the HSE and deals mostly with heroin addiction in his public sector work.

As for people with opioid problems, he calls the treatment picture “a postcode lottery”, where people in Dublin have better access to services.

McGovern thinks there is a lack of Government investment in addiction services. “[They’re] not investing in this. We know that for every euro you spend on heroin treatment, you’ll save between €4 and €7 on associated costs of drug use: crime, hospital admissions, illness. That’s how much it saves.”

McGovern has seen a change in the “social divide” of heroin use, with more people from economically well-off backgrounds presenting for treatment. “It’s far more well-off and middle class than people think,” he says.

O’Gara agrees. “Addiction doesn’t pick a social class or age group. I don’t treat people under 18, but it’s 18 up to 80-plus . . . Addiction doesn’t choose income levels. It is a complex medical illness that is partly genetically driven and partly environmentally driven.

“At the end of the day, people are going to abuse alcohol, use substances, and gamble. What’s reflected in our society is reflected in all liberal Western societies . . . Really, it’s all about treatments, and we have a long way to go in certain areas.”

According to a spokeswoman from the HSE, there has been an increase in methadone treatment and in the availability of detox beds. There is also a new project to evaluate the suitability of Naloxone, a heroin-overdose antidote; 600 patients will receive the drug, which will be evaluated to inform the mainstream provision of Naloxone.

The most recent figures available from the HSE indicate there are 787 residential treatment beds available. They are a combination of detoxification and rehabilitation beds, the majority of which are for alcohol and opioid addictions. Some beds are available for cannabinoid and illicit drug addictions.

“Although the HSE does not provide specific services for persons with a gambling addiction, those who present for addiction treatment are offered the same range of interventions as those who present with a drug and alcohol addiction, or a mental health concern . . . the HSE also provides funding to a number of voluntary service providers who treat gambling addictions in addition to drug and alcohol addictions. This funding is provided from Drug and Alcohol services core funding,” she says.

St John of God Hospital will host a free lecture Addiction Recovery – Approaches for Sustaining Self and Family on Monday, May 18th, at 8pm. It is part of Minding the Mind, a public lecture series about mental health issues that runs until the end of May.