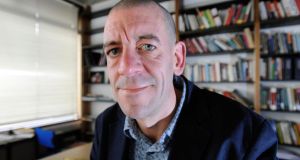 Diarmaid Ferriter: decision was taken without consulting the expert advisory group on the centenary, which includes himself and other prominent historians. Photograph: Dave Meehan


Historian Prof Diarmaid Ferriter has questioned the decision to invite members of the British royal family to the Easter Rising commemorations in 2016.

He said the decision was taken without consulting the expert advisory group on the centenary which includes himself and other prominent historians such as Martin Mansergh and Prof Eunan O’Halpin of Trinity College Dublin.

Prof Ferriter, professor of modern history at University College Dublin (UCD), said the emphasis on the good relations between Britain and Ireland had led to a “noble aspiration to please everybody and include everybody, which will not do justice to the historic divisions that were there that we need to understand”.


Complicated
“Allegiances and loyalties that existed in Ireland 100 years ago were very complicated and multi-layered,” he said. “I’m worried that we are heading towards something that is full of holes as to the historical reality at the time.”

He is concerned that the presence of the British royal family will end up “distorting history quite significantly”.

The decision to invite the royal family was first mooted in September by the Tánaiste Eamon Gilmore. It would appear to have been confirmed by Queen Elizabeth II in her speech in Windsor Castle last week when she said: “My family and my government will stand alongside you, Mr President, and your ministers, throughout the anniversaries of the war and of the events that led to the creation of the Irish Free State.”


No consultation
The decision to invite a royal family member was taken without consulting the expert advisory group which meets every six to eight weeks. “The State can make this invitation, but what are we there for if we are not going to be asked for advice on big decisions like that?” Prof Ferriter said.

“The State doesn’t own the legacy of 1916. Nobody does except the people. We are trying to organise public consultations to get people’s views.”

He believed the presence of the royal family might give succour to those who believed the Rising was unnecessary, as the British government had committed to the introduction of home rule once the war was over. “I’m on the side of evidence. There was no evidence that Britain was prepared to settle its Irish question until it was forced to do it. We don’t need to abandon our critical faculties because of the warm haze after the Queen’s visit.”