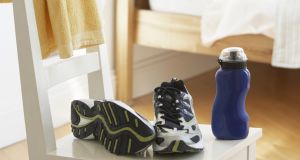 Don’t prioritise a run over sex. The best days are those that begin with a run and end with an orgasm. Photograph: Thinkstock

Q So Grit Doctor, I am beginning to feel that exercise, specifically running, is actually taking the place of sex in my married life. Is this okay? Running seems to satisfy me completely. SA

A One thing sex does share with running is that people spend a lot more time talking about it than doing it. This does not, it would seem, apply to you. On either count. Perhaps you are new to the sport, having embraced The Irish Times Get Running (www.irishtimes.com/GetRunning) as part of your resolve to get fit.

This is to be applauded and these newly discovered highs are so satisfying, so invigorating, that they are leaving you feeling as ecstatic as you once did when you first discovered true love and orgasms.

Perhaps this new running habit is helping you lose weight too, leaving you feeling lighter, as well as more energetic, less moody and reaping all the numerous physiological benefits that regular running brings with it.

Possibly you are passing out with exhaustion at the end of the day the moment your head hits the pillow and sleeping soundly for the first time in years – another cherished benefit of regular running.

And perhaps it is the combination of some or all of the above that is leading to an overall sense of wellbeing and contentment that leaves you feeling complete. Long may it last.

It’s certainly also the case that running stimulates a lot of the same happy hormones that get released during sex and orgasm. Endorphins are an obvious starting point.

However, endorphins take quite a while to eek out over a run, in contrast to sexual arousal and orgasm when they flood your brain.

Oxytocin – the cuddle drug – that also gets released at the point of orgasm (and apparently from eating chocolate too, not that I would ever advocate doing that habitually) can let loose during a run.

Oxytocin happens to be the “labour and childbirth drug” – it helps us bear the pain of our cervixes dilating over hours and hours during childbirth. Bearing this in mind, it will come as no surprise to learn that only a seriously long run kickstarts any oxytocin release – two hours and upwards, so half-marathons and beyond qualify. Not really what’s going on for most of us during our weekly runs I suspect.

Now, it goes without saying that I don’t want to put you off your regular runs because there is so much more to be gained from them.

You have the naturally drug-induced high; strengthening your heart and bones; lowering cholesterol and blood pressure; reducing stress; helping maintain a healthy weight . . . and the rest.

But, equally, there is a lot to be gained from enjoying a sexual relationship with your husband, so I want to encourage you back to both.

Unusually for my column and in an effort to motivate you back into the saddle, I am going to advocate sex over running to help see you, and all of us, through the rest of winter.

Here are my top five reasons why sex beats running:

1Sex is a far more enjoyable and relaxing activity for the body, with no danger of the joint strain that excessive pavement pounding brings about. Except for head space, there is very little that is enjoyable or relaxing during a run. The pleasure and the relaxation come after a run, and only after a good 30 or so minutes hard at it.

2 Sex is better with a partner, fostering intimacy and connection. Running is infinitely better enjoyed solo, and while being connected to one’s own breathing and heartbeat has its moments, communing with nature isn’t quite the same as being truly intimate with your other half.

3 Sex is much quicker – unless you are practitioners of the tantric variety – and can be satisfactorily completed in a matter of minutes, orgasm being a fast and certain route into hormone heaven.

4 One cannot over-do sex, or burn out from pushing oneself too far. So I am reliably told.

5 Sex can be enjoyed under a duvet and followed immediately by a guilt-free long sleep.

During this miserable, rainy, bleak winter weather when we are deprived of sunlight, vitamin D, and, at times, our sense of humour, the surest, easiest and fastest way to lift our moods, not to mention the most life affirming, is to snuggle up under the duvet with our other halves.

Regular running, once your body has gotten used to it, may well lead to you having a greater sexual appetite than before. Both activities are similar in that the more you practise it, the better it gets, and the more you come to depend on it as another source of wellbeing and contentment. Another good habit has been made.