Ask the Expert: How do I tell my sons their father is bisexual? 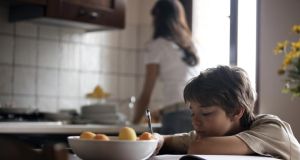 As one of my boys is 12 and prepubescent, I’m concerned about telling him about his dad before he has established his own sexual identity. Photograph: Thinkstock

Q I’m a mum of two boys, and I separated from their dad about a year ago. The reason for the split was that he was a cross-dresser and bisexual, something he didn’t tell me about before we married.

He is quite public in his lifestyle choices and I am concerned that the children will be teased about this in school, and so on. I’m not sure if I should tell them, or say nothing. If I tell them, they may be better prepared if someone makes a comment to them, but if I tell them I’m worried that they may not take it well. In addition, as one of my boys is 12 and prepubescent, I’m concerned about telling him this before he has established his own sexual identity. What do you recommend?

A Generally, important family issues are always best explained to children by their parents. This allows you to check their understanding of what is at issue, and gives them a chance to express their feelings and ask questions. Most importantly, it opens the channels of communication between you and them, and gives them the message that they can always talk to you about important things.

If their father’s sexuality is public and known by many people then I would say it is best that your children are told by you and their father. This is preferable to them finding out indirectly from someone else, or discovering the news in an unhelpful way (such as by being teased by peers).

In addition, they may already know or sense that something is different about their father’s sexual orientation so it is best if you begin a conversation with them so they can understand this. Such a conversation may also help them have a more appropriate understanding of the separation: for example, children frequently hold untrue ideas or blame themselves for their parents’ separation, so a good conversation now will correct this.

Also, if they talk to you about it then they can be supported by you in coming to terms with the news and you can help them think through how to talk about it to other people if needed.

Exactly when to tell your children, how best to tell them and how to share the “telling” with their father are more open questions. And the fact that you and their father are separated can make this a bit more tricky: here are some guidelines.

The best way to tell Given that the news relates primarily to their father and his sexuality, I think it best if he tells them first in a child-centred way that they can understand. This could be either with you present, if that were possible, but it would also be appropriate for him to do this one-to-one with the children, starting with the older boy.

Once they are told, then you can follow up with them about how they feel and ensure you are there to answer their questions and to support them. For example, you could start a conversation: “I believe your father has told you his news; how do you feel about that?”

The ideal way to approach this is for you to meet their father, discuss the issues and make a plan together as to how best to tell them. Of course, I appreciate that this might be difficult if your coparenting relationship is under strain or if he is not engaged as a father with this children. Even if things are difficult between you and their father, it is important to try and communicate with him before you talk to the children yourself: do seek support, such as mediation, if this is difficult.

What age to tell/how to tell Parents often wonder at what age to talk to children about sensitive issues such as sexuality, and it is easy to put things off because these conversations are difficult. The general advice is to talk to children when they show signs that they are ready or want to know: this is often much sooner than parents think. Also, it is often easier to raise these subjects with children when they are younger – and can understand the news in a matter-of-fact way – before they get into the emotional turmoil of the teenage years.

In broaching the subject, it can be helpful to proceed slowly and gently. You want to raise the subject of sexual orientation casually at the start, to see what they think and feel – for example, if it comes up as an issue in a soap opera. You also might want to also check in with your children where they are at with the separation: “It’s a year since your dad and I separated, and I’m just wondering how you are doing with it all.” As a separated parent, it is useful to “check in” regularly in this way.

Managing your own feelings of upset towards their father In your question you say that your husband’s sexuality and his failure to inform you about it was the reason for the breakdown of your marriage. Understandably, you might have felt deceived and even betrayed by the news, and you are not alone in having to deal with something like this. In talking to the children, it is important to separate out your own feelings so you focus on their best interests and their needs.

You want to communicate in a way that allows them to develop a compassionate, tolerant understanding of sexual orientation and of their father. In addition, what will help them in the long term is a balanced account of the reasons for their parents’ separation so they are not caught in the middle and can keep a relationship with both parents.

Dr John Sharry is a social worker and founder of the Parents Plus charity. He will be giving talks about positive parenting in Kilkenny on Monday, March 30th and about overcoming anxiety in children in Dublin on Thursday, April 16th. See solutiontalk.ie