Food with soul that’s tasty too 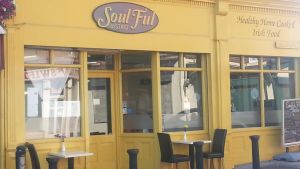 A friend who loves to cook is so busy that her daily diet consists mostly of sandwiches. If you sliced her down the middle you’d find seams of bread, she says. So when she stumbled across a small restaurant serving the kind of home-cooked food she would make herself, it was a find.

The restaurant was Soulful Bistro in Dublin’s Stoneybatter, and the recommendation was enough to get us out the door on a dark, rainy night.

The restaurant sits on hilly Manor Street in a corner building where Prussia and Aughrim and Manor Street meet. You can’t miss it, given that it’s painted a yolky yellow colour outside. It has been here for just over a year.

Inside it’s handsomely decorated in a grey-green paint, with an exposed dark brown brick wall, dark floor and 1990s black leather dining chairs at bare tables. Short sayings about food and life are hand painted on parts of walls. There’s a thick red candle in a cast iron holder on our table.

The whole look has an unself-conscious feel to it, as if it evolved over time rather than being assembled in homage to some model of a Brooklyn basement with filament-bulbs and distressed ironwork.

The menu reads like a meeting of two worlds: restaurant and health food shop. Given the damp start, I’m tempted by the chicken noodle soup, but we go for a shared starter platter as it will give us a canter through several of the options. The front of house is run by Saray Santa Maria Gomez who’s name-checked on the website and deserves her credit. She’s a professional to her fingertips.

Unfortunately, there’s a bit of a wait for the starter. Mercifully, it arrives before we’ve drained our first glass of wine. It’s a generous wooden board of tasty things. There’s a house pâté with dark crisp rye toasts. No animal is mentioned in the context of the pâté but I reckon a chicken gave up its liver somewhere along the line and in a good cause. It’s gorgeous. After one taste, the next time I look there’s just a teeny trace of it left on the board.

I’ve been distracted by a lovely portobello mushroom, a flat juicy disk of meaty mushroom with a just-melted slice of Brie on top. It’s the kind of thing you would make at home, if your home had some excellent ingredients to hand. There’s a tangle of rocket and baby spinach tastily dressed with caper berries for added kick. The only disappointment is a goats’ cheese and red pepper tart, the base of which is as soggy as the night outside.

We’ve gone in two completely opposite directions on main courses. When my large white plate of food arrives, it looks delicious but there’s a shock on the first forkful as it’s cold. Yes, the menu did call it a salad, which ought to have been a clue. I have serious plate envy for a luscious Hereford burger between a wholemeal seeded bap, with great skin-on chips in a mini basket. Once I get over the idea that my salad is a salad, it’s an enjoyable dish. Three small fillets of of whiting lean up against a mound of quinoa that has had scallions and tangy tomatoes finely chopped into it. It’s one of the healthiest plates of food I’ve eaten in a restaurant in a long time. So I balance it out with helpings of hot, fluffy chips from the other side of the table.

The delay at the start means we’ve run out of time for desserts, which seem to provide the same mix of healthy and decadent options in the shape of fresh fruit salad or chocolate cake. Mixing bistro staples with healthy food is an interesting idea and they pull it off with genuine soul here. We’ll be back for dessert.

Dinner for two with three glasses of wine came to €57.60.