Is Trump’s America a place we would want to raise children?

If he wins, my wife and I may follow through on our threat to move back to Ireland from Iowa 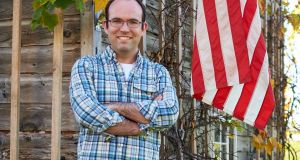 ‘While we love Iowa, its culture, people and landscape, is Trump’s United States – or even Clinton’s – a country where we want to raise children? We’ll know in just a few days.’

Every day I refresh the polling websites. Trump to Clinton, Clinton to Trump, back and forth. These last three years have been my real introduction to American politics. Email scandals, bankruptcy, Benghazi, Trump Steaks . . . when I was in Ireland, I thought I understood this grinding election process seen from the other side of the ocean. But now, I realise nobody can truly get this circus until you have made the United States your home. Especially when you live in a battleground state. And particularly if you live in the first caucus state: Iowa.

So how did I end up in Iowa, of all places? Let me give you the whirlwind version. I was born in New Jersey to Irish parents in 1985. We moved to Dublin when I was six years old. After I finished up at NUI Galway in 2009, I moved to South Korea to teach English and that’s where I met Bryna, an Iowan girl, who was also a teacher. Together, we moved to Vietnam in 2012 and then Iowa in 2013. Since coming here, I’ve learned to drive, Bryna and I got married, I became a volunteer firefighter and now, as I’m a dual citizen, we are getting ready to vote.

“Is this heaven?” “No, it’s Iowa,” responds Kevin Costner in Field of Dreams. That’s the film that introduced me (and probably most of the world) to “The Hawkeye State”. You might be inclined to imagine it as just corn all the way from the Mississippi River to the Missouri, but there’s so much more to this state.

This is a varied, big-sky landscape: the limestone bluffs and trout streams of northeastern Iowa; the rolling, muscular banks and forests of the Cedar River Valley, immortalised in the paintings of Grant Wood; the undulating Loess Hills in the far west and the prairie remnants throughout. I cannot believe the wildlife here sometimes. The sky is often filled with migrating bald eagles, turkey vultures, geese, pelicans and cranes. The fields have deer, wild ground turkey, pheasants, the occasional mountain lion and so much more.

The towns and villages are beautiful and come in a myriad of styles: German, Dutch, Victorian, Gothic, Frank Lloyd Wrigh’s Usonian and even a whole compound of Ayurvedic architecture in the city of Fairfield, a centre of Transcendental Meditation. In fact, Fairfield is not far from an Amish community in Kalona. There are so many disparate cultures side by side.

Just this year we bought our first house – an unpainted cedar-siding homestead in the Amana Colonies, a group of villages built by German communalists in the 19th century.

Let’s get back to the election now. We were Bernie Sanders supporters from the start. Iowa is the first state to choose party candidates, which means those who are running spend almost two years here campaigning. After Hillary Clinton’s narrow victory in the Iowa caucus, we still hoped Bernie might win the other state party races, but as the months went by it became clear that she would be the nominee.

On the other side of the political divide, the horror of Donald Trump as the Republican nominee slowly became a reality. He almost appears now as Kaiser Wilhelm II on the cusp of the first World War. To me, a Trump victory would be like striking a match and holding it over a canyon full of petrol-soaked pallets.

I was able to talk politics with colleagues and neighbours across party lines in the early days of the campaign. But as the weeks and months have gone by, and the gun violence of the American summer grew more intense, both sides became more intractable. Now it’s only a few days before America votes. Bryna says you usually see yard signs and bumper stickers everywhere during election season. This year, there are scarcely any for Clinton and few for Trump.

I refresh my browser again: Trump is now ahead in Iowa, a 58 per cent chance of winning. Hillary was ahead just two days ago, but the email scandal resurfaced last weekend. The whole thing is sickening.

So on November 9th, the day after the election (and my 31st birthday), I might be able to follow through on a threat so many Americans make every year: Bryna and I may actually leave for Ireland.

All my family and best friends still live there and so much of the life that I miss. As we think about starting a family, we worry about the threadbare social welfare net of the United States, how to pay for our children’s education, and what might happen if we ever lose our jobs and get sick.

While we love Iowa, its culture, people and landscape, is Trump’s United States – or even Clinton’s – a country where we want to raise children? We’ll know in just a few days.