In Blue Raincoat’s retelling of the space race, Yuri Gagarin makes for a reluctant star 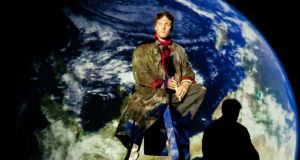 Robert Lepage’s The Far Side of the Moon explains the difference between astronauts and cosmonauts. Astronauts, we are told, look for the stars, but cosmonauts search for meaning and beauty. Jocelyn Clarke’s brisk biography of Yuri Gagarin, the first man in space, for Blue Raincoat Theatre Company, seems to engage in both searches.

The production is often beautiful, trailing intriguing meanings, but its more ardent search is for a star.

In a curious framing device, five members of a no-frills Russian theatre group address the audience in enjoyably blunt terms. Here is Ivan (John Carty) who will play Yuri, “a very, very important part”. As a parody of Soviet agitprop, delivered with severe expressions and comically fake accents, it’s fun, but when it is confirmed that this is a contemporary troupe visiting Ireland, the mode becomes confusing.

Gagarin’s peasant childhood is presented partly as the Soviet ideal, but with the telling unreality of a Disney movie. Against Joe Hunt’s large video projections, director Niall Henry likes to perch Carty on a ladder, silhouetted by the moon: a dreamer awaiting greatness.

If Clarke means to subvert that trajectory with the framing device or wide-eyed prophecies (“One day you will fly machines that none of us have ever dreamed of”), Henry’s bright staging seems to take him at his word.

A more complicated story emerges, though. Gagarin was made a Soviet hero because he was unexceptional: an “ideologically reliable” Khrushchev-approved farm boy. That’s an asset to the Kremlin, but it’s a problem for a dramatist’s desire to explore inner space, as Clarke archly implies (“How did you sleep?” someone asks Yuri. “As you taught me,” he replies).

Carty, a sympathetic canvas for any projection, is adored by his Russian mammy (Sandra O’Malley), marries Frances Healy’s hilariously played ice princess, downplays a rivalry with Bob Kelly’s more interesting Titov, and takes instruction from a series of stern patriarchs (all Ciarán McCauley).

Gagarin is less interesting for who he was than what he represents, yet Clarke and Henry seem undecided what that is: hero or pawn?

“Everything is normal,” ground control assures Gagarin during the abnormality of orbit and weightlessness. And they’re right: 52 years later, the cosmos seems quite familiar. For all the show’s ramshackle charm, the first cosmonaut is trying to catch up with us. Until November 2