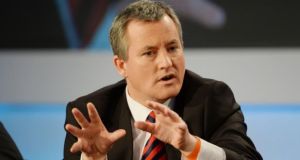 Fine Gael’s Kieran O’Donnell has been elected in Limerick city on Count Eight at Limerick Racecourse, regaining a seat he lost in 2016. File Photograph: Alan Betson

Brian Leddin has been elected in Limerick City on count nine. The counting is completed now.

Earlier, Fine Gael’s Kieran O’Donnell was elected on Count Eight at Limerick Racecourse, regaining a seat he lost in 2016.

Jan O’Sullivan, a Labour TD for the past 23 years, was excluded on the same count, and her 4,667 votes, in the end, brought Leddin into the fourth and final seat ahead of Independent Frankie Daly.

Mr Daly, a former Labour councillor, was returned as an Independent to Limerick City and County Council last May, while Leddin was elected to the council this year on his first attempt.

His mother Kathleen is a former Mayor of Limerick and a Independent city councillor. His late father Tim served on the Limerick Council for Fine Gael.

On Sunday, the Sinn Féin surge carried Maurice Quinlivan to the top of the poll in breathtaking style.

Mr Quinlivan, who was expected to retain his seat in the four-seater, said he was “humbled” after he was elected on the first count with 11,006 first preference votes, 1,780 over the quota.

The Sinn Féin TD, who won a seat for the party in 2016, said it was a “special” feeling to the top the poll, which has typically been achieved over the years by Willie O’Dea of Fianna Fáil.

Mr O’Dea, a former minister for defence, said he was “disappointed” with his personal first-preference vote of 9,198, despite his election on count two with 9,460 votes, 1,546 votes behind Quinlivan.

The pair have a history which Mr O’Dea would rather forget. He previously paid compensation to Mr Quinlivan after he took a libel action against the Fianna Fáil TD. The matter led to O’Dea resigning as minister for defence, in February 2010.

“I was up against a formidable vote-getter who we were told could never be removed from his position – and we [Sinn Féin] did that,” Mr Quinlivan said in his victory speech.

Mr O’Dea visited the count centre at Limerick Racecourse earlier but was not present when he was declared elected on the second count. He was tracked down to Souths Bar in the city, where he was photographed toasting his election with a pint.