Winterval gets festive season under way in Waterford 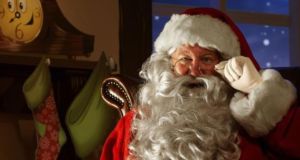 This year’s Winterval kicked off the festive season on Friday when Santa delivered a giant ice block to the artists at Waterford Crystal who will transform it into a set of seasonal sculptures.

The opening of the third Winterval festival in Waterford coincided with the switch-on of the city’s Christmas lights, performed by Santa Claus and Mayor Lola O’Sullivan after the big man arrived at The Mall on a huge iceberg and was greeted by thousands.

Winterval features a market of 60 cabins and a trail of 32 different festive events.

A delivery of a half-tonne block of ice — towed from the North Pole according to festival organisers — was presented to the House of Waterford Crystal where it will be turned into ice and crystal sculptures to be unveiled at the Winterval Ice Rink on the quays next Saturday, November 29th.

Last year over a quarter of a million people visited Winterval, despite some high winds and wet weather, and CEO Sinead O’Neill Hartery said they hope to increase the visitor numbers this time around. “We are delighted to today open 32 festival events, 17 of which are free of charge and we look forward to welcoming lots of families to Winterval over the festive period,” she said.

David McCoye of the House of Waterford Crystal said the ice-block is a great opportunity to create a new piece of artwork. “The sculptures will be wonderfully unique and will capture the festive season and the heritage of Waterford.”

Among the highlights of the festival is a newly-commissioned 3D light show featuring The Grinch, Santa and other characters which will run, free, every half-hour on the front of the Old Deanery building.

Other attractions include a helter skelter, snow-globe, the Hasbro Toy Museum, Penguins at The Palace, a free movie theatre showing global Disney sensation Frozen on a loop, a giant Winterval postbox for Santa letters and more.

Those wishing to journey through the city trail can take the Winterval Express and the Horse Drawn Sleigh Stations are the place to head to for a trail trip.

Winterval will run until December 23rd.